Nothing special, but it's my first (dateless) Standing Liberty Quarter!

I haven't been detecting at all for almost four weeks. After I made dinner for the kids, I told them I needed an hour or two hunting in the dirt or I would go insane. My options were limited, so I went to a school I have pounded with my AT Pro. I decided to bring my Equinox 600, as I've seen many videos lately where people have gone behind themselves with the Equinox 600/800 and found either deep or poorly-oriented objects and coins they missed with other machines. I only found two coins worth sharing, and both gave off scratchy signals from one direction only. (In all fairness, it's possible that I hit these with the AT Pro and simply didn't dig them before.)

This first was a 1940 wheat cent. The obverse was a little toasty, but there is still some good detail on the reverse. 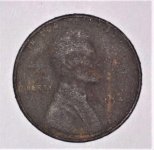 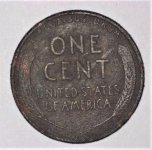 The second good find was my first ever Standing Liberty Quarter. From what I found online, it is a "Type 2" variety (not bare-breasted), as there are the remnants of three stars still visible beneath the eagle on the reverse. It's slick, and only worth it's weight in silver, but I'll never get rid of it, because it's my first! 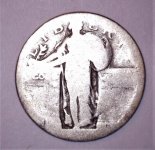 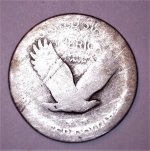 As always, thanks for taking the time to give my post a look. May your next hunt bring you joy!
Upvote 23
M

Congrats. It's always nice to knock a first off the list.
OP

Even worn, those are beautiful coins. Nice find.

1sts of any kind are all good! Congrats...
OP

GaRebel1861 said:
Even worn, those are beautiful coins. Nice find.
Click to expand...

Thank you so much!
OP

smallfoot said:
1sts of any kind are all good! Congrats...
Click to expand...

I agree, and I appreciate the sentiment! Thank you!

Wish i could dig one in any condition.

Nice finds, the quarter is still nice smooth or not. My first (and only) SLQ was dateless but I knew it was a 1917 because the reverse was the type 1 variety.

Nice, I have yet to dig one. It’s still beautiful in that condition

Congrats on the old coin...

Congrats on your first Standing Liberty. They are a great coin, no matter what the condition.
X

I'd argue that it is special! Those are hard to find with dates but that would still make my day! It's seen better days but still a great find!!!

Way to go! I think SLQs are special too. They had such a limited run rate that I think they are harder to find than Barber quarters.
OP

Thanks to everyone for your kind comments!

Looks like a ghost from the past. I'd be happy to find that one! Congrats

Congrats on your first SLQ!

I don't believe in ugly silver!! Congrats on a bucket lister

You have GOT to be kidding