I have logged in over 500 hours in the field with the White's Spectra V3i I bought last year. I feel confident that I am digging up the targets my coil passes over, have no problems understanding and operating the machine, and have found colonial gold and silver and relics. The on screen target ID, discrimination, depth, and sizing are reliable. I like seeing the three frequencies and have learned target audio responses. I mostly hunt heavily forested undeveloped lands looking for colonial settlements which began in the 1650's. Their Puritan material culture was sparse and they most likely lost little. I can spend full days in the field walking at a good pace and find nothing more than old paper shotgun shell brass bases and rose nails along with iron debris. Recently I have spent time doubling back over my search areas at a slower pace and digging up signals from the iron range I initially passed over. I'm not missing stuff and the iron hits are either rose nails, horse shoes, or iron scrap which I do not collect. When I first got the machine I experimented with high trash mode then later went over those areas and found I didn't miss valuables. I haven't tweaked the pre-set programs which this machine allows great latitude with. I run in the coin and relic mode and occasionally reset my ground balance.

The downsides: not weatherproof. The coil can be submerged but I carry a plastic bag in my back pocket in case it rains. They also used two plastic toggle closures on the battery compartment. When you first see these you know they are going to fail and it took six months for one of mine to do so. Plus they are hard riveted on making replacement tougher. I wish they would make a weatherproof version and design a shoulder strap. I have to walk in to my hunting areas sometimes up to an hour and have resorted to using a rope to sling it across my back. The wireless headphones are nice but have only had to use them near crashing surf as I am in the woods. I did something stupid this winter when I tried to jump a narrow channel to avoid having to back track. I made the jump but the other side had ice on the edge so I slipped hard and cracked the handle-mounted LED screen against the ground. It bent it to one side but I straightened it out in the field without apparent loss of performance. So yes, I would say the unit is durable. Their Bullseye TRX pointer can act quirky at times acting as though it has a short, but I think this is a cross-talk issue with the detector. Sometimes I wonder if I have a bad unit.

My hunting areas have underbrush filling in making the tick situation dangerous. I usually wear rubber knee boots hosed down with Sawyer pyrethium spray which works great. You don't want to get this stuff on your skin, I don't even allow it on my clothing. But the higher brush is too dangerous to pass through. So now I am exploring the possibility of beach hunting of which I am surrounded by miles of it. I just don't like what salt water does to metals. The soils in the forests I work often have a sand base with good drainage so things are in good shape when I dig them up. This detector does have a salt water program and the wireless headphones work great. The soils in my area and often beaches have a high iron content. This machine does a good job of negating the signal. Today I was experimenting in heavy iron sand and was pulling up change no problem (see photo). But I think I'm going to invest in White's Beach Hunter TDI for the weatherproofing and pulse induction depth. What I don't like is giving up my visuals and going totally by audio tones, fearing junk distraction. So I am going to run the V3i in the Salt Beach Program with wireless headphones to start with, trading pulse induction depth for discrimination. I will be able to report on this shortly.

I don't have experience with other brands. I had two White's machines during my youth. I like how the company has been in business for a long time and the products are made in the USA. I think many units from different brands are capable corresponding to price points. What's important is getting proficient with your machine. I think many people may be looking at machine performance when much of the sport boils down to two things: somebody has to lose something and you have to find it before someone else does. 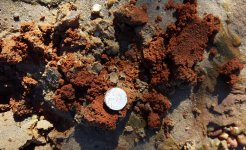 The Spectra V3i is White's premier metal detector. We've included all our treasure-hunting features, and your investment is backed by a comprehensive 2-year warranty. The beautiful, full-color HD display clearly explains the depth and metal type of detected objects.

The V3i is a very good machine. I love the fact I can adjust just about any machine settings, awesome for a person like me.

Hello, am a longtime Whites user, DFX and about 2 years ago got the V3i. After hundreds of hours of detecting, here are some basic conclusions. The V3i is a relic monster. I have dug pencil eraser size iron and bits at 12 inches, just at 76 on discrimination and using the 10.0 filter. But in the coin and jewelry mode....its adequate and thats it. It forced me to try another detector, a new Anfibio multi. Which I found the same or more coins with at greater depths. If you are a relic hunter, get the V3i. If you are after other things, then try other detectors. The DFX was superior in its day, but anything deeper than 7 or 8 inches on a coin, it wont even register.
You must log in or register to reply here.

Is it safe to clean these bullets?