🥇 BANNER Paid for the new detector on the first day!

Excited enough I need a tranquilizer. I just got a new to me but used Tesoro Tejon. It was priced right so I said what the heck. I went to my new permission and figured out which end to blow on, har har har. Anyway, it's a Civil War 1864 site in Virginia. Switched loops, put the big loop on it and started beating bushes. Wasn't getting much, I mean like NO signals. So By the end of the day I had tried several different strategies. First was just wander around in the woods. Got a couple pieces of iron from ration cans and some nails. This time I did NOT trip over the wire fence.

Second strategy was to do some "tree and sticker bush bumping". The English translation is to go real close to all the trees with the loop and same thing for briars (go right through them), and see if anyone there previously left anything. Well, got some more iron and half a horseshoe.

Third strategy was to explore this here rock pile. Got a couple iffy signals. Dug down a few inches and about 8 inches down picked up a layer of ash! Fire pit! Nails, a kepi buckle in brass, melted lead, a very pretty small porcelain button, an iron underwear button, most of a bullseye canteen in parts and FIVE eagle buttons in perfect condition with shanks. Well, that made my day. It was getting a little late, so I carefully filled in the hole and started "tree bumping again". Got a very nice nearly complete CW flat tin can, whoopee. I haven't gotten everything out of the bucket yet.

But then.....headed back to the truck. Got a signal right next to the road (it's a private gravel road) and pulled out my FIRST (and probably only and last) CSA plate. It's very much like the one posted here a few weeks ago. Has the same kind of weird hooks on the back-at least weird to me. Looks like a Virginia Arsenal and looks most like Mullinax's #108. I now have a massive stress headache. Too much excitement.

Three plates in 2016! Who would have thought it! (Also found what may be a small meteorite, but I have to check it out.) Got so excited I left it in the truck. Sorry about the pics, haven't had time to wash anything up yet. Took the pieces to a well known Virginia CW dealer to look at and he advised me not to wash the buttons, but when they were totally dry to flick the dirt off with my fingernail. HE said that way the eagles and shield would stand out much better. I told him I was going to clean the buckle, looks like a rich green patina under the red dirt, but he suggested not touching it at all. 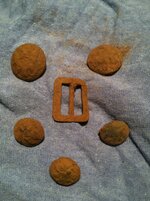 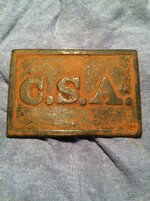 As you can see I was wiping the high spots on the plate. The color in the photo is a little off, it's a little too bright. Took it with the cell phone. Need a tranquilizer.
Upvote 96

Several adult beverages might be in order as well...
OP

Some awesome history there. WOW.
OP

At a hunted out camp no less. Dig holes everywhere. (I cover mine, and I covered and HID the rock pile!)

ah um yeah holy cow. Banner! Congratulations smokey! You wouldn't get offended if I called you a lucky dog would you

Oh wow, you made some dynamite saves! Nice persistence. Enjoy that trophy...

smokeythecat said:
At a hunted out camp no less. Dig holes everywhere. (I cover mine, and I covered and HID the rock pile!)
Click to expand...

anyone that doesn't kick dirt back in their holes deserve's to miss a piece like that. I am still in aww over this one, beautiful piece smokey!!!

looks like ya need to take some sandpaper to that Buckle.
Kind of rusty

Change your title to "CSA Plate." I think more people will click . . . IMO

Excellent find!!! Did you get yourself cleaned up and changed?[emoji13] I take an extra pair just for days like that. Lol
Congrats Bud, that's a hunt you won't soon forget[emoji106] [emoji482]

Big congratulations. That is one of the top plates to dig in my opinion. Voting banner now. Post a pic of the back of the plate so we can see the hooks.
OP

Its not rusty it's that awful red Virginia clay dirt from hell. The buttons have the greyer dirt due to the ash.

Took my blood pressure. Think I need to retire from detecting on this one. Probably won't though. First gold coin, when was it? early 2013, second one last year, 3 pieces of gold at the beach last fall.
Jan 1 2016, 2 and 3 produced a breast badge, NY button w gold and "Christmas spur". I should go throw up now....Way too much excitement.

I was actually looking to try to find one of these to buy, good thing I didn't do that!

Congrats on a great find
OP

Oh yeah, the back. Duh. Here it is. The hooks have the weird (to me) little upward tilt at the end and are really worn on the "tips". Two are pushed pretty closed to the back of the buckle, the one that would have grabbed the belt is "higher" off the back of the plate. 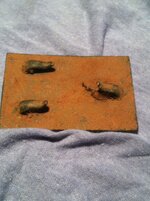 So how do I get unexcited? Got a blasted headache now!

smokeythecat said:
So how do I get unexcited? Got a blasted headache now!
Click to expand...

Send the buckle to me as a gift. That might cure some of the excitement.

Kicking butt with a fantastic detector! Big Congrats. BTW the Tejon is hell on wheels with the 5.75 concentric search coil at real trashy sites.

relic nut, were you watching? For a minute I though is this live or is it Memorex?
You must log in or register to reply here.