Some kind of double clip 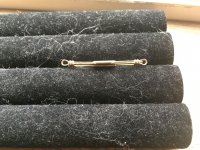 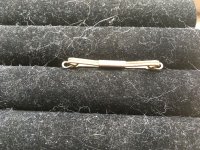 I was hunting at a 1890?s park and found this. I have no idea what it is or what it was used for. It?s gold plated has SWANK 50 on the bottom. 75818 on the side. Any indemnification and or history would be greatly appreciated. Thanks for any help 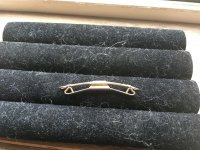 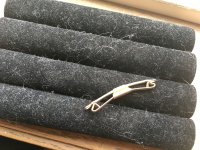 Cool thing. It's a "collar bar", worn on shirts or blouses like this: 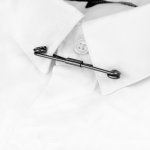 I think Swank made them in th 1930s/1940s but a bit of Googling will give you dates for the company.
Upvote 0

You guys are awesome
Upvote 0

You're welcome. The history:

The Attleboro Manufacturing Company had a subsidiary called Baer & Wilde producing men’s jewellery, which was incorporated in 1919. They had developed a hugely successful range of cufflinks (Kum-A-Part) in 1918 and focussed on those as their sole offering, with Attleboro ceasing to make women’s jewellery altogether. Swank was first used as a brand name in advertising from 1927 and by 1931 B&W were specialising in plates for Swank Collar Bars, at which time B&W ceased operating as a separate company and the Swank brand name took over. Then B&W merged with its regional distributors in 1936 to form Swank Products Inc. (renamed Swank, Inc. in 1941).

During that transition period, their items progressively moved from being “B&W” marked to co-branded “B&W Swank” and then only the “Swank” name.
Upvote 0

I am a firm believer you must type with more than 2 fingers.

I am a firm believer you must type with more than 2 fingers.

Yes, but my typing is along the lines of the old British comedian Eric Morecambe's description of his piano playing. All the right notes... but not necessarily in the right order.
Upvote 0

Red-Coat said:
Yes, but my typing is along the lines of the old British comedian Eric Morecambe's description of his piano playing. All the right notes... but not necessarily in the right order.
Click to expand...

I once thought that Rum enhanced typing abilities... and it did...

BUT... i was the only one that knew what it meant when i was done.

:P
Upvote 0
You must log in or register to reply here.

Rolled lead - fishing sinker? Can it be dated?