Slow day, but....I did get a spoon for my spoon collection. Says......"Sons & CC Nickel Silver" Not sure if there is a preceding name before "Sons" if there is I sure can't make it out. It has a little fluke shaped feature on the end of the handle, but it is very faint. 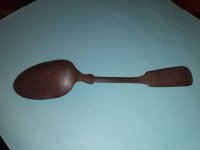 There is something b4 SONS. Nice spoon though.

The spoon is a generic fiddleback, and those generally don’t feature in the pattern books since almost every flatware company made them from about 1820 onwards. ‘Nickel silver’ (which is a copper/nickel/zinc alloy containing no actual silver) didn’t come into usage until the 1830s as unplated metal and then as electroplate in the 1840s.

I think you’ll find it says “XXXXX SONS & CO” and while there could be small and obscure undocumented companies to whom such a mark could be attributed, there’s only one mainstream company as a possibility (assuming the spoon is American): W.H. Glenny, Sons & Co. who used this mark between c1865-1898:

William Glenny was an importer, wholesaler and retailer of glassware, crockery and flatware established in Buffalo NY in 1840, but his sons weren’t added as business partners until c.1865. The company went on to become one of the largest tableware importers in the US and their own mark was applied to goods produced for them. They went out of business in 1898.

Tried to rework the image to see if any letters or numbers
could be brought out..

There are definitely letters and/or numbers preceding "Sons",
and as best I can see there are no "X"'s. Last letter appears
to be a T.

DizzyDigger said:
Tried to rework the image to see if any letters or numbers
could be brought out..

There are definitely letters and/or numbers preceding "Sons",
and as best I can see there are no "X"'s. Last letter appears
to be a T.
Click to expand...

When I said “XXXXX SONS & CO”, I was just using the Xs to signify an unknown number of indeterminate characters. I wasn't suggesting that any of those characters might actually be an X.

In terms of company marks on flatware, W.H. Glenny, Sons & Co. was the only documented mainstream American business who used a mark ending "... SONS & CO" as far as I am aware. I would be sure it's one of their spoons and - hopefully - that last letter will prove to be a 'Y' not a 'T'.
You must log in or register to reply here.

Out in the mountains again