Treasure of Camelot - the search for King Arthurs lost crown.

Treasure of Camelot - the search for King Arthur's lost crown.

The Treasure of Camelot is an online treasure hunt competition to find King Arthur's lost crown, which draws its inspiration from the ever popular legend of King Arthur and the wizard Merlin.

The story begins after the death of King Arthur at the battle of Camlann, when Merlin buries Arthur's fabulous gold crown. By solving the clues left by Merlin in the Treasure of Camelot story the crown, worth £30,000 ($47,620), can be found and won as a prize, or if preferred, a cash prize can be taken instead. The winner also wins a trip for 2 to Las Vegas for 3 days and 2 nights, staying in a fabulous hotel on the Strip with meals and flights included!

The full story and all the clues necessary to find the Treasure are available as an eBook, which combines beautiful hand-drawn illustrations with an enchanting story, reminiscent of vintage British annuals and comics. 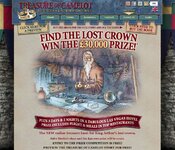 The characters and their adventures are brought to life as you read the Treasure of Camelot story, solving the clues left by the wizard Merlin on the way to finding the Treasure.

So come along and join in the greatest treasure hunt of the year! You could be the one who wins the amazing prize! - Treasure Of Camelot | hunt for King Arthur's lost gold crown

www.treasureofcamelot.com
You must log in or register to reply here.

Brand new treasure hunt: Mutmonix - Get Money for Your Brain