That article brings back a lot of memories of Trev! He was up in Alaska with a friend prior to the 2007 NWMiners Rally and stopped by to visit with us during the rally and one night we went out howling! It was a LOT of fun!!
S

I did read Trev`s writing studied his pictures and was inspired to build the above contraption. But have not tried it out at the beach or even with real sand going thru it. I do like the water flow in it...
OP

Looks good.... SO...
Well when Ya gonna get some dirt run through it?...
What are you using for the matting?
S

Still have a few more changes to make.. Maybe a near complete re do. The Green mat is veranda carpet. Need to get more of that stuff. Not sure about when it will get a sea trial.
A

Just thinking out loud here...."What if I doubled or tripled the number of, as Trev calls them, "gravity columns" but still have the sluice the same total length? After all the gold is noted (and shown on some online pictures) to drop out first so why not have more of them? Each one should work their magic to some extent."

Per the above, most who use gold cubes on the beach use four or more trays so maybe, just maybe your unit set up as per my thoughts could equal their recovery rate(?). I have thought often about doing this but normally prospect Oregon beaches...no power allowed...and gave up because streams do not have enough drop to operate so gave up. This gives me more inspiration since I now have started working at Cape Disappointment.

Here is the only problem with that......
You would have to add more catchment area to compensate for the space the gravity well took up.
As you can see both the top tray and second tray are capturing gold clear to the end of the tray. 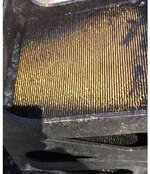 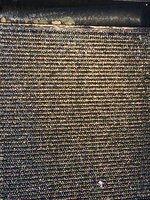 That's because you filled all the riffles with gold just like filling them with black sand in a slow flow sluice.

arizau said:
That's because you filled all the riffles with gold just like filling them with black sand in a slow flow sluice.

What a terrible problem to have.... Has never seemed to be one of mine though....

Trev was a hoot indeed, loved that mailbox dredge also as ez to run with smaller engines and compact. Miss you too Russau-I'll even drink to that trip in DC WY....John
R

John we may try a trip (same time/ same place ) to DC this Summer ! If the ole man can get away!

What does the expqnded metal do?