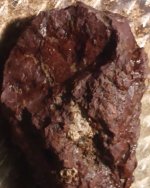 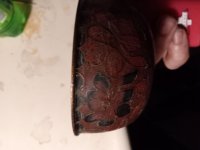 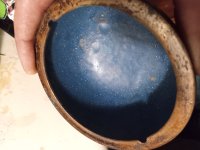 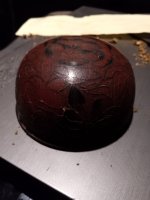 Danual said:
You don't think of that popping there with my dry washer metal detector around a little bit I won't find a bunch of little manganese balls
Click to expand...

Danual said:
And me and Bigfoot are friends we love finding gold
Click to expand...

Clay Diggins said:
Color to be added to the silica, alumina and flux glaze out of some minerals could happen but never from a rock. The OP is showing a rock.

The minerals most commonly used as coloring in glazes are all metal oxides or metal carbonates. Mostly combinations of copper, iron, chromium, vanadium and cobalt are used. These oxides and carbonates are created in a distinctly separate process usually involving quite a bit of other minerals, chemistry, grinding and heat processing. Although there are a few naturally occurring metal oxides and carbonates that can color glazes no modern potter would rely on those raw materials to produce commercial grade glazed pottery.

The OP shows a very professionally manufactured bowl with one of the glazed surfaces visually similar to the color of a rock they found. I can state with absolute certainty that the rock was not used in the creation of the glazes on the bowl shown.

Of course theoretically the rock could have been produced by an ancient society of bigfoot potters and buried so the OP could discover the rock after they acquired the bowl....

But I'm darn sure that didn't happen either
Click to expand...

Danual said:
You don't think of that popping there with my dry washer metal detector around a little bit I won't find a bunch of little manganese balls
Click to expand...

Danual said:
Matter of fact that just reminded me I can check USGS or the diggings or a few other sites to see if that's a meal site or an assay shop if they have records on it
Click to expand...

Or Bigfoot will tell me cuz only me and him know where every single mind and audit anything on record I can find it Mill sites placer mines hard Rock mines anything I want to see all on my Google Earth thank you usgs
Upvote 0
You must log in or register to reply here.

Look at this guy, would ya?