It's going to be hard to figure out where to start on this one. Keep reading, this is awesome. I was digging a park yesterday, watching the folks walk their dogs, and the kids playing on the swing sets and after about the 50th dig, with about 25 coins, including 2 wheaties and a buffalo I got bored. So I decided to go aways' north to a farm I have detected before, that does have some old stuff on it. It has been pounded, mainly by me, but I decided to hit a few harder to get to spots. Which proved wise. I walked 5 feet from the car, and balanced the machine. Walked six steps and got a decent signal, like a dime signal. Out popped a splash of gold. No, not a gold coin. But even dirt encrusted, I could see it was a Civil War type domed button. Dug a little more before I had to leave to go see the accountant, taxes are done, but got 1 more flat button and 2 modern dimes, and was so curious about the button I just had to get out of there and get home and get it cleaned.

It is best known due to alumni John Wilkes Booth, who did attend for a time 1852-1853. Booth, if you remember your history, assassinated President Abraham Lincoln in April of 1865. Another alumni, Samuel Arnold, was convicted of conspiracy in the murder and went to prison for it.

Maryland was a very divided state during the Civil War, and this particular school had a strong southern bend. While the headmaster was a strict abolitionist, the school body leaned strongly to the south, and it was reported when each southern state seceded from the union, the student body cheered and fired the cannon in salute to that rebellious state.

The school gave the Confederate Army General Fitzhugh Lee, another alumni and General Steven Elliott, among many, many other soldiers.

Professional button collectors consider this a true southern school button. The button itself is intact. Whew! Alphaeus Albert's "Record of American Uniform and Historical Buttons", Bicentennial Edition lists it as SU378 on pages 342 and 343. It lists its backmark as "Scovills & Co. Superfine".

This button does NOT HAVE THAT BACKMARK.

It has the "Waterbury Button Co.**" which was used exclusively 1861-1865. This backmark has NEVER BEFORE BEEN REPORTED ON THIS BUTTON.

So, for now, the button is UNIQUE. This backmark is pictured in McGuinn and Bazelon's "American Military Button Makers and Dealers; & Dates" figure 21, in the appendix. It's the 1861-1865 mark.

I confirmed the information with one of the largest Confederate Memorabilia dealers in the nation, who I have known for years, and he confirms the designation as not only a Southern used button, but one with a unique backmark.

The site was along the route some of Jeb Stuart's cavalry used during the Gettysburg Campaign. One of the alumni probably lost it on the raid from Hanover, though York down into Maryland. What a ride for the little guy!

Digging a Confederate button is no easy task these days, but digging a UNIQUE button is mind blowing. I have not fully cleaned the back yet, and the mark is somewhat weak, until I get it cleaned up a little better. 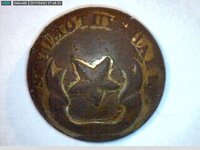 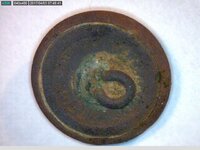 Smokey, first a Hewge Congrat's to you on one rare Confetrit' button. That is so cool looking and in good shape too. This could rank high up on a Bucket List find for sure. Nice piece of History goes along with this piece too. If I may share a little Ga. History that is related to this button and the state of Maryland during the war. The 8TH Georgia Infantry Regiment was at the Battle of Gettysburg along with thousands of others. As you stated, Maryland was expected to secede from the Union and join the Confederacy. On July 4TH 1864 as the Army of Northern Virginia was crossing the Potomac River back to Virginia after the battle, the 8TH Georgia regimental band struck up the tune "Maryland, my Maryland. This infuriated the soldiers so that they began pelting the band musicians with rocks. The band quickly changed to the tune to " Listen to the Mocking Bird ". Lol Again, You did Well on the find of one extraordinary' rare button. This will have a special place of honor in your collection no doubt. Continued Success to you.
OP

My ancestors were in the 1st Georgia Cavalry and 5th Mississippi Volunteer Infantry. In the old days, diggers would find journals and such and buy them to find the camps. This was nested among new Roosevelt dimes and foil.
K

Congratulations on a tremendous find! Isn't it amazing how much history such a simple item as a button can tell us. Thanks for the history lesson. Great dig!

Congrats on the unusual button

Great find and awesome research. This is banner material in my book for the Rarity and research. Nice job!

Man I read your post and liked it. Thought about it a few minutes and then re-read it again. I must say this is a Banner worthy find in my option I appreciate anything you never see posted .Great find Congratulations. Banner vote in
C

Excellent find and very rich in history. Are you sure the letters just aren't just very faint? Even the grainy picture looks like I can make out a few letters.

KENTUCKYWONDER said:
Congratulations on a tremendous find! Isn't it amazing how much history such a simple item as a button can tell us. Thanks for the history lesson. Great dig!
Click to expand...

Yes, it it. In fact I was just saying that the other day when my daughter dug a GAR button, which she researched, and it turned into a great history lesson. But this button is off the charts. Amazing find, congratulations to smokeythecat, and thanks for the background information. It's the stories that make what we dig special. Without the stories, and the history, the items are worthless in and of themselves.
H

Congrats, congrats, congrats on an awesome and extremely rare button find! I loved the background history on the button and the Military School. Now, you need to get back out there in the hard to metal detect places on the farm and find some more rare relics. You will get my Banner vote for the find.

Totally Awesome find! Congrats ! Great pics of it for us to see and thanks for the write up to help me (us) understand it's significance and history
on such an extremely rare button.

Sounds like yesterday was 'your Day' The Button Hid & Waited for You ,lol.

Great Finds Come from close to the Car/Truck.
WTG Davers

& I was lazy Yesterday & Stayed Home.

Personally The Button look's GREAT the way it is, 'You Know the Rap about over cleaning'
But
It's yr Button. What I'm saying is The Back-Mark is Readable In person --So Good enough IMO.
"Banner"
Last edited: Apr 3, 2017

Congrats on an awesome button. Haven't see that one before.
M

Nice find and very well written. My BANNER vote is in. Congrats.

Somewhere below the mason-dixon

Great work Smokey. Amazing button, definitely a banner find. That farm has produced some crazy finds the past few months. When you think you have it figured out you get hit with another curve ball. In this case a Great curve ball. LOL

I would be very careful with cleaning

Wow congrats Smokey! That button is beautiful as is to me.
You must log in or register to reply here.