I found this barrel 10 years ago and I think it's time to get it ID. It's an octagon barrel, 36" long. I was able to fit a .359 drill bit in the muzzle. What caliber would this be. I know it's difficult to put a time frame on something, but any ideas on the era. 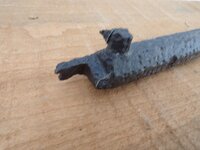 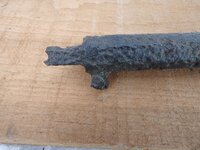 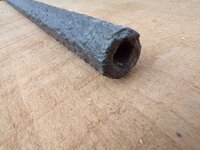 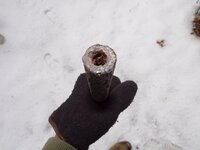 Looks like a percussion ignition barrel. Caliber would be hard to determine accurately due to the rust. Maybe a .40 caliber rifle, a hunting gun for sure.
Upvote 0

It's most likely a .36 cal hunting rifle. It'll likely date between 1820 to around 1860. Anything more than that there's really no way to say.... Pretty nice find, I'd love to dig an old musket
Upvote 0

I think it will polish up
Upvote 0

It appears the be the barrel from a Kentucky Rifle. It's hard to estimate an age, because it could have been flintlock originally and converted to percussion later in its life, or it could have started life as a percussion barrel. Either way, it's a neat find.
Upvote 0

Fullstock said:
It appears the be the barrel from a Kentucky Rifle. It's hard to estimate an age, because it could have been flintlock originally and converted to percussion later in its life, or it could have started life as a percussion barrel. Either way, it's a neat find.
Click to expand...

Agree, looks like a possible drum and nipple conversion from a flint lock to a cap lock, so the barrel could date into the 1700's. .359 would also make me think .36 caliber. Neat find.
Upvote 0

Try measuring the outside diameter of the barrel at each end and through the center. Pre 1810 or so would be a swamped barrel, meaning it would be larger at the breech and muzzle and smaller through the center. A later barrel would be the same diameter from end to end. The small caliber and shorter length would probably indicate a later rifle although it could have been shortened at one time. Most of the earlier, Pennsylvania or sometimes called Kentucky rifles had longer barrels, usually well over forty inches and often larger caliber. Later rifles like the Ohio or Leman style were usually of smaller caliber and shorter barrel.
Upvote 0

I have seen some in .38 caliber (0.380"), but 0.360" is pretty standard. The forged iron barrels would perhaps start at .36 caliber, but in use the softer iron as compared to modern steels wears. Occasionally the rifling would be freshened up and the barrel smoothed. Then the gunsmith also made a new mold for the owner and he left the shop with a rifle that shot a slightly larger ball.

I checked it with a micrometer. It is .910 the whole length of the barrel.
Upvote 0

OK, I was pretty sure it was a later one. 1840's through 1870's short barreled rifle. These were pretty commonly made in western PA, Ohio, and the Midwest.
Upvote 0
You must log in or register to reply here.