Yes, even in my little neck of the woods.

Clallam County:
Lost Treasure
A treasury agent by the name of Victor Smith in 1861 stole $9,000 in
gold coins and buried them inside of a strongbox along the banks of the
Straits of Juan de Fuca, near Port Angeles on State 101. Also two miles
west of Port Angeles there have been large numbers of American double
eagle gold coins that have washed ashore after storms which probably are
coming from a nearby shipwreck.

Lost Treasure
At the northwestern tip of the state by the Straits of Juan de Fuca on the
Makah Indian Reservation is Near Cape Flattery. Relies and coins have
been found by treasure hunters that most likely are from the Spaniard
settlement here dating back to 1792.

During certain times of the year the timbers of an old ship can be seen at
Cape Alava which is on the Pacific Ocean at the northern end of Olympic
National Park. Silver coins dating back to the late nineteenth century and
artifacts have been found by treasure hunters at this time of the year.

PeninsulaPaul said:
Also two miles west of Port Angeles there have been large numbers of American double
eagle gold coins that have washed ashore after storms which probably are
coming from a nearby shipwreck.
Click to expand...

Is there any actual documentation of this ?
OP
P

I can check with the historical society if you like. I am still looking for someone to mentor me on this whole hobby, the one time I have loads of freetime and can't seem to find anyone in this area.
B

I'm in grays harbor, I'm game. Been detecting just under 20 years. What machine do you have

would this be the one ? 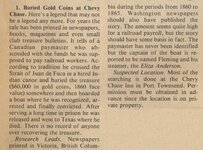