I swear this "plate",with an embossed Anchor was identified.......was it??
http://www.treasurenet.com/forums/w...ing-round-thing-anchor-casings-knife-etc.html
Sort by date Sort by votes

I would be very interested to know what this is. I found 2 pieces of the exact same item. I didn't have enough of mine to make a good guess but you can see an anchor. I will post a pic of mine when I get home.
Upvote 0

I found my post, the photos aren't great but you can see it's the same. No one was able to ID this for me... 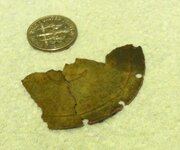 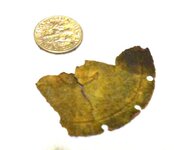 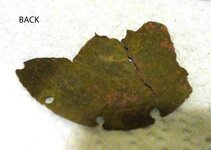 ...yes,it was Identified as an early Neck stock decor....however the picture has a tassled end on a 32" "sash"...certainly appears to be a sash vs a neck stock?

I found mine at an 1883 homesite that also had a home there in the 1850s. There were homes in the area during the 18th century though. Would you agree that this is Revolutionary War era? I agree that the placement of the disks doesn't seem right for a neck stock, they would be hidden. So, I guess it's still technically still not solved? I wish there was a clearer photo of that item. It's really tough to decipher anything.
Last edited: Dec 12, 2013
Upvote 0
OP

Honestly in my un-expert opinion,going off where I know of 5 being found...no,I dont think they date to the Rev. War.....in my opinion......I do know of three(and now yours)that have come from 1850's ish sites
Upvote 0

Without doing any research, just a swag, the anchor looks civilian. Naval anchors are fouled, like in the photo. 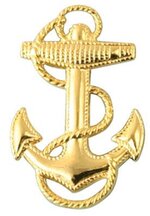 Some civilian decoration anchors are fouled and some aren't. Was there ever a time the navy used a non fouled anchor for rank or rate?
Upvote 0

Just got out of relic shop here in stafford - asked nick Harris about this- he has two of these he is gonna bring me to photograph next week - it dates to the war of 1812.
Upvote 0

HutSiteDigger said:
Just got out of relic shop here in stafford - asked nick Harris about this- he has two of these he is gonna bring me to photograph next week - it dates to the war of 1812.
Click to expand...

Did he say exactly what its use was? Can't wait to hear more details.
Upvote 0
OP

........if they date to that period I would sure like to know how 5(two pairs,and one single) I know of have come from sites that were across the US from any 1812 action,and were found with nothing else within the context of that time frame either...I aint buying it
Upvote 0

btw - he has two for sale.. and i don't know if he meant They were exactly used in the War of 1812 or if they just date to that time period.... To be honest - I really don't care. Figured i'd ask a expert and I did.. So whatever, it's been way to wet and rainy to do any detecting :/ -

Quite sure he is simply repeating what has been stated in a magazine article....and I am here to tell ya,dont beleive everything you read!He is selling,so of course he is going to push a cock and bull story!!It does matter to me,because I like to base my knowledge on fact....not trying to line my pockets. Happy Holidays to you as well
Upvote 0

Thanks... But anyone who knows nick knows he is not pulling any bs.. He is owned his relic shop for over 35 years, mentioned in many artifact books and is respected by many in the metal detecting community. He deals with this stuff full time... I just want to mention that beside the point of I'd-ing this. He is a good friend of mine and I have known him since I was in diapers. Anyone who knows nick knows he is not A Bser.. Just wanted to make that clear to not to you but anyone else who comes across this thread- I shouldn't have even posted his response to this...
Upvote 0
OP

Hut,no dis-respect meant toward your friend......my intention is only to get to the facts.Truth be known there is nobody that knows it all,and anybody that is not willing to look at new evidence and keep an open mind is not an expert.I am telling you that there are several examples of these now that have come from places with no Military activity,are all the way on the other side of the US from any War of 1812 activity,and from sites which provenance does not support War of 1812 either.Buttons that date to that period are found on the West coast ocassionally yes,but I personally beleive that those were likely surplus....I cant see somebody buying a Naval neck stock(I think it is a waist sash)surplus
There has been discussion about an two piece buckle with an Anchor that an expert states dates to the 1700's as well.There has been several posted on here all found in total non military sites,and found in sites that all provenance was a whole 200 years later than the time the expert has claimed...several other dis crepancies have been pointed out as well.That is just one example.....I could go on and on...as could most history buffs.
Last edited: Dec 15, 2013
Upvote 0
T

I dont think the item pictured is a waist sash , 31 inches is rather small for that.
looks more like a neck cloth or cravat where only the center wide part goes around neck and the two ends can be tied in different ways.? Witch would leave the two emblems side by side near the front.
But I can find no portraits or references to this on any military uniforms.
Upvote 0
OP

taz42o said:
I dont think the item pictured is a waist sash , 31 inches is rather small for that.
looks more like a neck cloth or cravat where only the center wide part goes around neck and the two ends can be tied in different ways.? Witch would leave the two emblems side by side near the front.
But I can find no portraits or references to this on any military uniforms.
Click to expand...

It very well may be,I just cant see it as a neck stock,especially with tassled ends,but I dont know?
Upvote 0
D

This is from a Naval neck stock from c.1798. The neck stock is linen lined with tin. The two pewter discs covered the arteries of the neck against sword wounds when the stock was worn in combat on deck. The anchor device was worn in France and also by early American Naval personnel. John Paul Jones' buttons displayed the same pattern anchor. 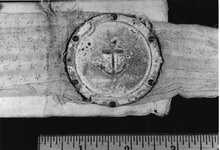 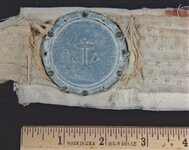 BOOT KNIFE, HOW OLD IS IT?