I find a lot of bullets and shell casings on the land that I usually detect on here near Atlanta, but it?s usually obvious that they?re fairly recent, within in the past 50 years or so. But this one looks a little unusual to me. I couldn?t place it, even after doing some research. Admittedly, I don?t know much about ammunition at all.

Any ideas as to its identity and or age? Thanks so much and advance! 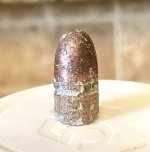 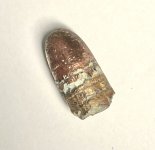 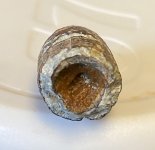 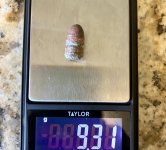 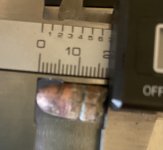 Being solid metal other than lead makes that a stumper!Definitely a fired bullet.
Upvote 0

Likely not solid brass but a FMJ .38 Special (brass jacket over lead). These were used by the US military for airbase and other MP patrols for sidearms.

I agree with Charlie P. and I would like to offer a little advice. You measured your bullets weight in grams. If your scale weighs in grains it would be best to post that. 9.31 grams equals 143.6753 grains. Also, please include a diameter size in inches, not millimeters. I am passing this onto you because I used the grams and metric measurements in the passed and was taught the best way to measure.
Upvote 0

Right on Charlie P, I would add the we use inches and grains in this country. Never the metric system.
Upvote 0
OP

Thanks Charlie! I'm going to mark it as solved. Appreciate everyone's help.

Charlie - would you think this was a 1940's era bullet? Or is there no real way to tell?
Upvote 0

You can only say it's "no earlier than" but not when it was used. The Hague Convention of 1899 forbade the use of unjacketed lead bullets for warfare - so yours is likely from after that time.

Officers, embassy guards, and rear-echelon soldiers issued sidearms could have ended up with .38 Special anytime after 1898 through the 1970's. May still be in use some places. Last I knew the Air Force was still phasing out the .38 Special revolver in 2017!
Upvote 0
OP

My first handgun was a 38 S&W police special. Loved that gun!
Upvote 0
OP

pistol-pete said:
Right on Charlie P, I would add the we use inches and grains in this country.
Click to expand...

Thanks man, I do too. It's just my scale weighs in grams, which is why I converted it to grains in my description, along with converting the 9-ish mm measurement to 38, 357, or 375.

Unless, of course, you're the US Army or Marine Corps, who began using the metric system as their primary system of measurement for weaponry in 1957.
Upvote 0

I used to shoot PPC with a local Sheriff's group and still have my 1955ish K-38 Target Masterpiece M-14. It is a honey.

Man, that is a sweet sweet weapon. Just a classic. I defiled mine by putting a Bianchi rubber grip on it, but I'll plead the ignorance of youth.
Upvote 0
You must log in or register to reply here.

This piece of lead could be one of two things