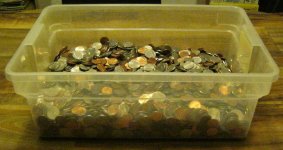 My best friend just unloaded 2+ years of her family's change on me. Couldn't be more excited about what I'll find.

Can you guess what the final total will be? "The Price is Right" rules apply ---> closest without going over wins the prize.

Prize? Yup. Winner gets the 1936 buffalo nickel I found last week at the casino. You guess the amount within 25 cents (without going over) and I'll throw in a 40% Kennedy half. One guess per person. Minimum ten contestants to make this a fair contest. Container is 14" long, 10" wide with just under 3" of coins. Get those guesses in!

*I'm betting there are no wheat cents either, we will see.
Cool contest btw!

What a great time!

There were two phases - counting, then date checking, all by hand. Both took a few hours to complete.
The final tally after a few strays were rounded up:

The obvious aberration here is why so few dimes? I've found more than that in one month of Coinstar hunting. If dimes had been more typically represented then the total would have been well above $300. Strange.

Oldest? 1941 nickel
Four people came within three years of this actual date, but I'll give bragging rights to Diggin-N-Dumps since he correctly predicted I'd find a 1944 wheatie.

THANKS TO EVERYONE WHO PLAYED!

I still find some in the wild.

I work as a bartender and pulled a 1964 quarter from the register (don't worry i replaced it...with clad)

I got a 1944 quarter in change at a cash-only bar here in town awhile ago.

It's rare, but it happens.

Thanks Immy. That was fun.

Big congrats to Weighit on your haul.
W

WOW, I actually won something!!! How exciting. I will send you my address. Thanks for the contest and making my day. I NEVER win anything....

Thats a lotta lookin!
You must log in or register to reply here.