I was going through some buttons I'd found recently at some Indian War sites and noticed this one was different. It's two piece, cuff button size, and has an eagle and stars so I feel like it's a military button, but not one I've run across before. The eagle is facing to its left. There's a ring of small stars around the eagle. The rim has texture and almost looks like a rope pattern. The back is rusty and seems to be of iron rather than brass. There's no makers information that I can see. Anyone know what it is?

Nice button! I'm sure someone will be able to ID it! So many knowledgeable folks here!
Upvote 0

Does the eagle have anything in its talons? Can you count the stars? I can't tell by the pics.
Upvote 0
OP

smokeythecat said:
Does the eagle have anything in its talons? Can you count the stars? I can't tell by the pics.
Click to expand...

There is a bit of damage in the lower third, but it could be an anchor and I believe I can see 13 stars with side lighting.
Upvote 0
M

I'd say it's definitely a U.S. naval button. The left-facing eagle, thirteen stars, horizontal anchor (pretty sure you can see part of the loop on the lower left), lined field and rope border are all there. There should be a little cluster of three cannonballs at the bottom in the smashed area.
Upvote 0

Hmmm.. an iron back would be of concern.
Upvote 0

With the comparison pictures you can see the differences, they literally jump out at you. When the OPs and the civilian button are compared you can see the similarities. 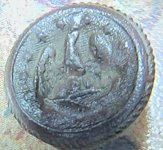 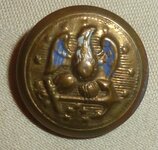 Thanks, CG. Had it been an actual Navy button that would've opened a whole new line of inquiry....how did a Naval button end up at an Infantry/Cavalry post miles from the nearest ocean? I know from my research that there were civilians and spouses posted at this site so it possibly could've belonged to one of them.
Upvote 0
You must log in or register to reply here.

Can someone tell me if this is a piece of wood or imprint of fish?