Can not believe I actually found one of these! Crummy signal, end of the day, and when I first saw it in the plug dirt I had that moment where I was like like: 'oh nice clay pipe bowl, now where's what the detector actually picked up?' But when I had it in my hand, I knew immediately what I had found and that it was uber rare! 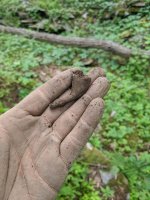 Credit where credit is due, I only knew what this was and the significance of it due to Silver Tree Chaser's post a few years back:


For those of you who weren't on the forum at the time, I would highly recommend reading through the above post because the history is fascinating. In a nutshell though these pewter pipes were fashioned by Native Americans as opposed to European-made imports. Some have effigy designs like animals, but it seems that many are plain like the one I found and made to resemble the European clay pipes. The academic reference book on these pipes ("Neat and Artificial Pipes:" Base Metal Trade Pipes of the Northeastern Indians) places their most common usage between 1645 and 1680 and with very few exceptions are found exclusively at Native American sites. They are also very rare with the above publication giving a museum census of only 43 examples and perhaps 150 known in total!

It's in decent shape considering the ground around here is punishing on pewter. I quickly conserved it when I got home and prevented further crumbling: 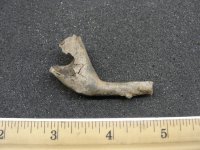 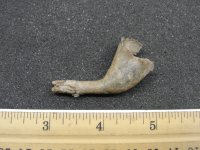 I marked where I found it so when I return I'll bring a bucket and a sifter to see if I can recover more of the pipe stem, but I wasn't getting any more signals out of the ground so it may not be there which wouldn't surprise me.

I found this pipe at a new spot I've been investigating lately, although it clearly predates the European settlement by close to 100 years. It's along a good sized river with an extensive set of falls. In the 1760's an iron forge was established here and I located where the seasonal workers made their camp while the forge was operating. It's just a flat area of woods now, but before this piece I'd been pulling up exclusively 18th century finds which made sense due to the fact that the forge closed down in the 1790's. 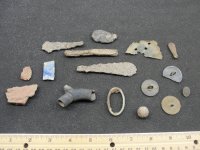 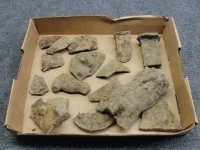 You can see so far I've found a handful of mid-1700's buttons, a knee buckle, partial barrel spigot, and part of a molasses skimmer. I've also found close to 60 pounds of iron. That cardboard tray is less than half and it's mostly huge fragments of pig iron from the smelting furnaces. There are also dozens of iron cooking pot fragments and I know there's more to this site than what I've found so far. Only two copper coins as of yet: 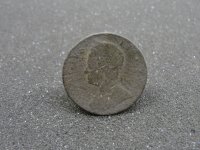 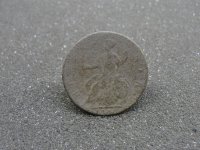 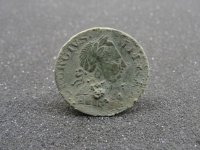 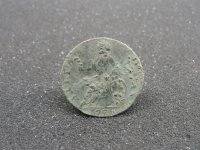 Dated 1775, but definitely a later counterfeit. It's in fantastic shape besides the metal bubbling which I suspect is due to a poor purity copper that the counterfeiters used. All-in-all a solid 18th century site, but the pewter pipe just knocks it out of the park!

The area is known to have had extensive Native American settlement and activity prior to the European land patents. The falls would have been a major landmark to the local tribes and I'm sure there was activity around them. This pipe may be the only metal artifact, but there could be hundreds more stone or earthenware pieces scattered about the woods that I'm walking over. It was just blind luck that I found this in a patch that also had 18th century activity and I can't even begin to fathom the odds of running across it where I did. Hopefully there's more that I stumble on, but even if not I'm thrilled to have found even this one little piece!

Awesome finds!!! What a rush that must be! Good luck on your next hunt there!

Not "Holy Moley", but rather Holy SMOKES!! You are on a roll Paleo. Great find to say the least. Love that counterfeit as well.

Very cool!! I would think smoking in a pewter bowl would be fairly toxic!!
OP
P

Very cool!! I would think smoking in a pewter bowl would be fairly toxic!!
Click to expand...

According to that book, there are pipe examples that are pure lead. My question would be how does one light and smoke the tobacco without melting the pipe metal?

Not "Holy Moley", but rather Holy SMOKES!! You are on a roll Paleo. Great find to say the least. Love that counterfeit as well.
Click to expand...

I seriously considered that for the title, but it just seemed too corny. Great minds think alike though!

paleomaxx said:
According to that book, there are pipe examples that are pure lead. My question would be how does one light and smoke the tobacco without melting the pipe metal?

Perhaps this would be a ahhhhhh "pinch hitter"... heh

What one makes when in a pinch and no pipe is available...

Some guy was like..."damn i really want to smoke this bowl but have nothing... hmmm lets melt and carve some shot !"

...i got one of those counterfeits - has zinc in it -- reacts like the zincolns and bubbled up

I apologize for my ignorance but how did the Native Americans come by the pewter?
OP
P

I apologize for my ignorance but how did the Native Americans come by the pewter?
Click to expand...

It's a good question; without a doubt the pewter was of European origin. William Bradford, governor of the Plymouth Colony, noted in the 1640's that the natives had molds to manufacture all different types of musket shot. Based on this one would have to assume that the natives were regularly trading with the colonists for base metal for use in casting. Obtaining pewter would be as simple as trading for broken spoons or old buttons and recasting them into the pipes. However this might explain why the pipes are so rare compared to stone or clay tobacco pipes as it would take significant effort to first obtain the pewter through trade, manufacture the molds, and then craft the pipe.

Never seen or heard of these. Neat find. 1640's would have been interesting times. Gary

Very cool find with the pewter pipe, the detail on those early George coppers is amazing.

big time gratz on such a rare find, great save
You must log in or register to reply here.

T.E. Bissell - stick in the mud