Hi I live in the town of Calexico California Border to Mexicali BC Mexico I have many friend and relatives there, they know that I am a treasure hunter and some times they came to me with some histories about treasure there one of them is about the Spanish galeon I search the internet found some stories about it. so I went to the place they say they found some wood belonging to the Spanish galeon took my equipment That is not very good I have 2 metal detectors MINELAB, 1 WHITE two box detector for detecting pipes and wiring, dowsing rods (the ones with frequency counter ) I got real good signal did some digging but water table is about 4 feet deep. that was my main problem so I am inviting anybody with better equipment than mine and I guaranty that will not be any problem with the locals and to share if we find anything of value beside I have some other hot sites including the treasure in the cave very confirmable. Thanks

Hello JoseRolando. I have hunted just north of Calexico - in El Centro and Brawley. Did good on coin hunting the parks and schools there. Coins back to barbers and IH's in the turf, etc...

As for treasure lore in Mexico, I'm convinced that a lot are just embellished superstition. Folks down there think that there is a treasure in every cave, backyard, ruins in the desert, etc... When you press the person telling you about a "certain" treasure lead, it's usually always "someone told someone ... who told someone ... who saw smoke or sparkles in the night", etc... I chased many leads for a month in Mexico, some of the compelling enough that persons claimed that coins were already found in a cave, or in the floor of abanonded ruins out in the desert, and more were likely to be there, etc.... After fruitlessly searching all day, I ask my guide where the coins are that were already recovered. Turns out, he didn't really actually *see* them, but heard from a reliable source about them. When we tracked down THAT person, turns out they too were reporting what someone else had heard, etc...

Hola Rolando: That ship exsts, but it is south east of
Mexicali in the Pinacate zone.

Tom, you have a pleasent sruprise coming to you, IF you will study Mexico's history. She really is loaded.

Hello Rolando,
If you ask anyone on this site, they will tell you that the lost ship story is one of my MOST favorite stories.... I can tell that a ship was located in Mexico in the 1960's and I can PROVE it !!!! Or at least I can show you a picture of the find. It was found in the Yuha desert out in the middle of a " sink " which could be the old dried up lake, Laguna Salada. 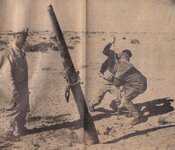 The newspaper I got the story from is the Imperial Valley Press and the article was written sometime in the 60's. Here are 2 photo's of the ship they found out in the desert...

In this photo they are " probing " under the sand to see how big the ship was ( although there is no report of the size ). 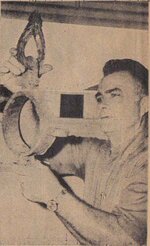 In this photo the man who found the ship kept the " collar ' from the mast. Said it was " handmade and very old ". 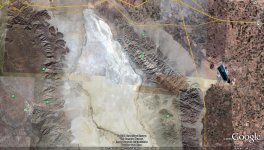 What a find at a competition hunt!!!

Ugliest worst find ever! Guaranteed to make you puke!