I've been dying to get out, but the ground here in the Berkshires is still too hard to get to. So I traveled south today in between appointments and found softer ground in nearby Connecticut, and just randomly parked the car as soon as I saw some open woods. Literally turned the Deus on and got a decent signal within the first couple sweeps under an old log. Figured it was a can because it sounded kind of big, but once I got under the log I could hear multiple signals.

First to come out was a Seated quarter, I couldn't believe it! Then another, and still there were signals in the hole, started to get pretty excited. When the dollar came out I nearly lost it, I couldn't believe my eyes! First dollar after 16 years detecting, I actually thought it was Seated because of the other coins, but then I saw the beautiful Morgan design!

Coins were coming out packed together, all in the same hole, I thought maybe I stumbled on a cache. Then I started finding bits of cloth mixed in the soil so I guess it could have been a purse or bag. Took a picture at the car and then after I got home, but I didn't want to mess with them too much because I like the way the corrosion looks where they were smashed together. 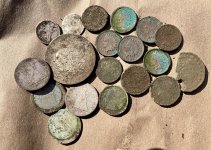 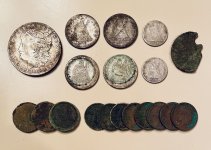 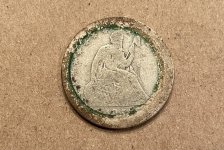 Very cool to see the cents that were firmly packed together show areas where the copper is bright. Also never seen that before. 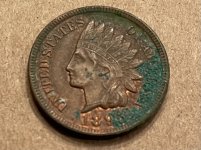 Still can't believe it, such a random one-in-a-million spot in the woods and I turned my machine on right next to it. One of the best finds I've ever had, already a great year!

Those are great finds! Congratulations !

Wow what luck! I’d call that a cache all day even if it was stashed in an old purse or bag. Great find!!

What a great dig, I couldn't imagine all of those seated coins popping out!

Now that's what a cache/spill should look like dirty, stained, stuck together, frozen in history-Man that is a beautiful sight-and so real!
Huge congrats and I will throw my vote in for this one.

Awesome find! How exciting!!! Bring them over tomorrow, dad and I want to see them. Can’t wait to get dad out.

That's an amazing spill, to say the very least. It's the sort of thing of thing all of us dream of discovering. Even better is knowing this kind of stuff is still out there waiting to be found. I think it's Banner worthy, and my vote is in. Congratulations cheffer!

That is amazing! That is one of the things that I dream of. That seems banner worthy to me, just because there is so much silver and it is all quite old! My vote is in.
D

Awesome hunt, did you continue to hunt or called it a wrap? I don’t think I could’ve concentrated on hunting after that find.

that is one sweet stack!
...and first signal too, you dont waste any time
give yourself a pat on the back you deserve it
OP

noladirtdigger said:
Awesome hunt, did you continue to hunt or called it a wrap? I don’t think I could’ve concentrated on hunting after that find.
Click to expand...

I stayed right in the area for a little bit, but I didn't have a lot of time. As Arnold says I'll be back

That's some amazing luck, send some my way

that is the kind of stuff I always hoped to find. congrats! that's incredible

South of the Mason-Dixon Line

Wow! That is truly a dream dig. Congrats!

And yes , a Banner find for sure !

Man you already nailed it this year and it's barely even March. The rest of the year is just gravy now.

Man o man what a dig!

Detector(s) used
Tesoro compadre, which can find needles, but looking for something with a bigger coil/detects deeper, waterproof salt/fresh user friendly.

Those are killer finds! I see what you mean by the corrosion...it does add a nice old look to it. Just amazing! Congratulations!