Although I had been out detecting often enough, my finds so far this year had come slowly - a trickle off several corroded coppers over the past few months and a worn-out Barber dime. One of the coppers found a few weeks ago was particularly bittersweet; it was a 1795 or 1797 Liberty Cap half cent with lettered edging. Sorry - I didn’t have the heart to post it. Mother Nature and long exposure to New England’s acidic soil had done its worst to Ms. Liberty. Despite my best hopes, the corrosion was too much.

On my last outing, I made one stop at an old mill site that offered nothing but a lamp top and hunks of ferrous material. I left after an hour or so. Lately, I’ve had some difficulty in scouting for new promising sites, but the sparse finds at the mill prompted me to try for new prospects. Back in 2017, I had recovered a rare Native American pewter trade pipe from the 17th century in a wooded area that surrounded a later-period barn site. Sadly, much of the area had been recently lost to a new residential development,

but an adjacent property looked equally promising. I had stopped by several weeks before to enquire about permission, but had to follow-up for a definitive answer. I felt some reluctance as I knocked on the front door owing to my appearance after digging earlier in the damp thickets surrounding the mill site. Covered in dirt, I only needed an orange jumpsuit and the sound of approaching bloodhounds to present the perfect image of an escaped convict. Happily, the property owners remembered my prior visit and were very welcoming. They kindly gave me permission and wished me luck.

I wasn’t expecting much in my search. I was just happy to be searching near the approximate area where I had recovered the pewter trade pipe two years earlier. After recovering only one plain button after a half-hour or so, I dug for a signal near an intersection of stone walls. Surprisingly, a Victorian-Period cufflink with gold gilt and a glass stone came out of the hole. It was missing its clasp end, but I soon found that as well only 12” away. 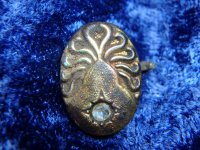 Instinctively, I searched further around the immediate area and came upon a solid signal (90 on the Deus) just a few feet away. I cut out a thick plug and pinpointed a clump of soil that produced a large silver coin. It had been a while since I’ve seen anything like that! I glanced at the dirt covered coin and could see a Seated Liberty figure. I was very happy having recovered my third Liberty Seated quarter in 30 years of detecting – or so I thought. I went on searching and recovered a 19th century tractor part, i.e., an ox shoe, an odd round disc of brittle pewter, and little else worth mentioning. The property owners were wonderful. I showed them what I had recovered and was invited into their home – straight to the kitchen sink to rinse the Liberty Seated quarter for a better look. I could barely discern the apparent date of 1875 on the coin. I was kindly invited to return another day to search further.

Upon returning home, I delayed examining the coin until I could do so with my 10-year-old son Matthew. When the time came, I grabbed a lamp and magnifying glass and explained to him the particulars of identifying old US coins. I verified that the date was 1875 and looked for the all-important mint mark, which was CC for Carson City, Nevada. I suggested that my son look for the mint mark as well by looking beneath the eagle on the coin’s reverse. Now I’m the king of wishful thinking

, and I thought that the size of the coin looked a bit off. I had one or two fleeting thoughts of a 20-cent piece when first recovered but dismissed such notions as nothing more than a wishful thinking. Oblivious to the odd appearance of the eagle, (I think I was quite tired by the end of the day), I pointed out to my son that the mint mark was above the “cents” located near the coin’s rim – “CENTS” on a supposed “QUAR. DOL.” coin. I finally got it when I saw “TWENTY.”

I said to my son, “Oh my god, this coin is a twenty-cent piece!” My son replied in disappointment, “Wait a minute - this coin is only worth 20-cents?”

I explained that it was the coin’s face value and then showed him its collector value in an old copy of Red Book. 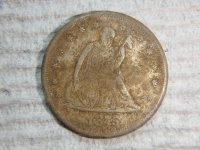 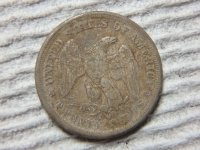 I didn’t hesitate at cleaning the coin with a brief cook of electrolysis – 30 seconds on each side of the coin and an extra 30 seconds on the coin’s reverse. I was very happy with the results and the coin’s overall appearance – no significant scratches or dings and just enough “LIBERTY” visible on the shield. 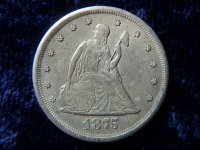 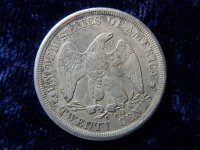 The twenty-cent piece coin was only minted for circulation for two years – 1875 & 1876; it’s the shortest lived denomination of all US coins. A few hundred were minted as proof coins in 1877 & 1878. The coins quickly became unpopular with the public, as the coin was easily confused with the quarter due to its identical liberty image and similar size, and I totally agree. It fooled me for a while, and I couldn’t be happier to have been mistaken! So I didn’t find my third Liberty Seated quarter in 30 years of detecting, but that’s fine by me.

Man, you almost never see those get found. Amazing find, that is a rare coin that most of us will never unearth!!

That’s gotta be a banner find

My banner vote is in. It's got to be one of the scarcest U.S. silver coins to find.
OP

cudamark said:
My banner vote is in. It's got to be one of the scarcest U.S. silver coins to find.
Click to expand...

Thank you for the vote. Agreed on the scarcity of these coins being dug. I don't believe I'll be finding another anytime soon.

Nice save and looks to be in real nice condition. Congrats

Nice - it cleaned up very well!

You cooked it just right too! Came out beautiful!

Never heard of a 20 cent coin until now.

Great post love reading it great finds ya never leave the game its just not always are time to win lol. Well done
I

great story and history thanks

What a score, congrats!!!

Donnie B from VA

Congrats on the beautiful coin!