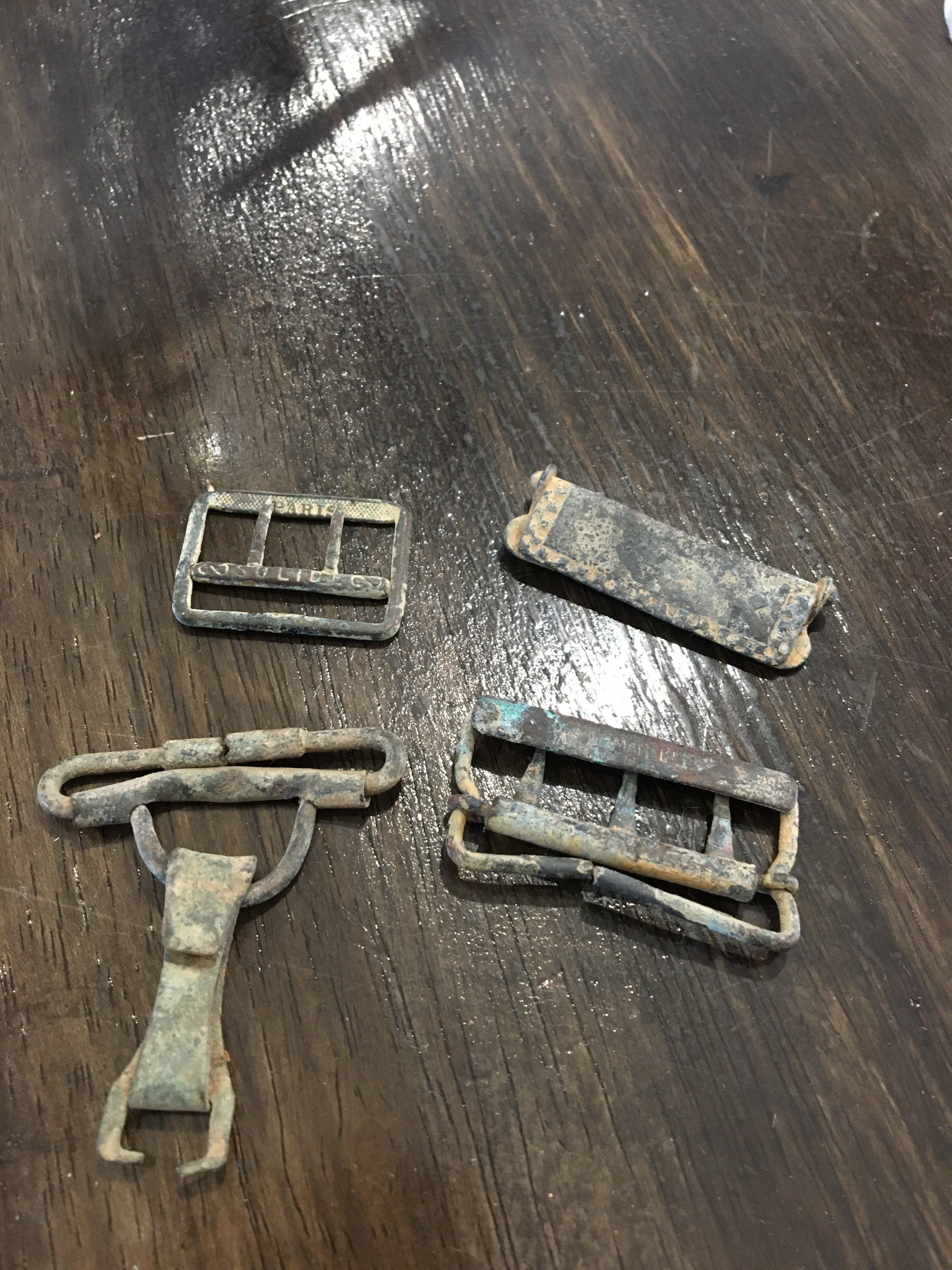 They are suspender buckles. They started being made in the mid 19th century. See if you can pull a manufacturer or date off of any.
Upvote 0

Welcome to Tnet. A moderator may well move your post to a more appropriate section (this 'Help' section is for assistance on technical problems with the forum).

Cool old buckles. The top left one is a “PARIS SOLIDE” buckle. The information below is quoted from “A SELECTION OF CLOTHING BUCKLES FROM THE WARNER SITE, LIVINGSTON COUNTY, MICHIGAN” by Tim Bennett and published as:

One of the earliest samples comes from the excavation of a Civil War era Confederate submarine, the H. L. Hunley, yielded a “PARIS SOLIDE” buckle inscribed with “G. C.”, a royal coat of arms, and “1860” belonging to Lt. Dixon (Hunter 2006). The Hunley was launched in July 1863 and was lost in February 1864. Other early examples including those inscribed with “1856” and “1857” were found by relic collectors on various sites including Civil War encampments. Only descriptions of the buckle as “PARIS SOLIDE” were provided by the relic hunters, however, no photographs were available to confirm the four digit numbers. The most recent sample, historically documented as part of a WWII era Red Cross cloth bandage used by Lance Sergeant Frederick Walter Dove while serving in Papua New Guinea and Australia dated circa 1942-1945. These two discoveries of “PARIS SOLIDE” buckles suggest production and worldwide distribution over several decades.

Another documented example lists the words “BIRMINGHAM MADE” along with “PARIS” (UKDFD 2007, Meredith 2011). It is unclear if “BIRMINGHAM” refers to the manufacturer name or location, however, Birmingham, England gained prominence as a manufacturing powerhouse during the industrial revolution and became well known for making all sorts of metallic objects (especially brass, copper, and steel) including buttons, buckles, and locks (Beresford 1960).

Professional, well-documented archaeological and historical samples, especially those attributed to a specific person ranging from the Civil War (Lt. Dixon on the H. L. Hunley) to WWII (Lance Sergeant Frederick Walter Dove of Australia) suggest that the time frame is significantly wider than previously thought, as early as 1860 (and possibly a few years earlier) to as late as the mid-1940s, a span of over eighty years. It also appears likely that the four-digit number refers to the year of manufacture as interpretation as a date appears to match contemporaneously with the age of sites and the artifacts found along with it.

This type of buckle was used to provide tension adjustment on the rear straps of men’s waistcoats (vests) to provide a smooth closed front behind the jacket opening (UKDFD 2007, Meredith 2011). An intact example is found on the back of a suit waistcoat made by James Neal, of Cambridge, England dated to 1906 (Manchester Art Gallery 2009). Other applications of the buckle include use for men’s pants and as well as women’s clothing such as corsets (Meredith 2011).<<<
Upvote 3

I moved ya from HELP! over to WHAT IS IT? for more exposure.

NOTE: Forum HELP! contains guides tutorials on how to use the new TreasureNet.com software.
Upvote 0