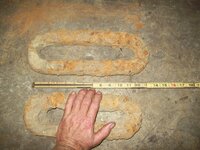 These were found buried side by side standing on end 175' from a Railroad track. They were VERY close to where I think some treasure may be buried. Does anyone know exactly what they are?
Last edited by a moderator: Dec 20, 2012
Sort by date Sort by votes

What state did they come from? All I can think of is the massive chain they made to block the Hudson River during the Revolution to keep out British ship. How about pieces of anchor chain? (BIG ship.)
Upvote 0

Watch aquachiggers videos on YouTube. They are train couplers to hold train cars together.
Upvote 0

Agree with Train Couplers- Cool find- and that far off the tracks- I think I know what treasure you're gettin' at! Good luck and HH! Keep us posted!
Upvote 0

They are called link and pin couplers. You found the link. I find them all the time along late 1890's logging RR tracks. Keep detecting the area, you may find some pins.
Upvote 0

Can you cook the rust off?
Upvote 0
OP
B

We found them buried side by side standing on end about one foot deep. We found them right near where an old dowser told me three Civil War army cooking pots full of gold coins are buried. I could not dig where I wanted to this time. I think these two links are "links to' where the treasure is buried. Back in the old days they would bury large pieces of iron so that they could use large compasses to detect as the compasses were magnetic and could be used as a metal detector. What do you all think? What would be gained by cooking the rust off and how do you do it? Maybe I will try it on one of them.
Last edited: Dec 20, 2012
Upvote 0

Here's a "link" (get it?) to my YouTube video where I find a bunch of them. I have a video I shot a few days ago coming up where I find another on land. Very cool find, I love 'em!

aquachigger said:
Here's a "link" (get it?) to my YouTube video where I find a bunch of them. I have a video I shot a few days ago coming up where I find another on land. Very cool find, I love 'em!

Very cool finds and aqua chigger,great video!
Upvote 0
You must log in or register to reply here.

R
Unusual iron chain - What was it's function?