How important is depth???

This seems to be the most important thing to most people.....How deep will this machine go....which one is deeper.....I am guilty of it myself. It is true that alot of good coins and relics are deep. But there is plenty to be found in the first 4 inches under the surface also. My personal favorite find was just 3 inches deep(a silver medallion dated May 31st 1853). I found a 1794 LC that you could have kicked out of the ground with your boot! My first silver coin was a dime at 2-3 inches using a $100 bounty hunter....When i first go into the hobby i dreamed about finding a civil war plate. Everyone said "they've all been dug up".....oneday i had a very shallow target that i almost didnt dig.....it was a beautiful U.S. breast plate! 2 weeks later, a short distance away i dug the boxplate to go with it. It was over a foot deep, but you get my point. So how about posting some of your great, shallow finds!
OP

oh, i almost forgot, last week i was hunting a modern park(for jewelry) when i dug a shallow silver hit.....1901 Barber dime at 3 inches!

I guess we will never know what is out of our depth range. I always wondered when I was pulling wheats and silver dimes on faint signals at the 6 inch level, what is deeper that I just can't reach, lol. Yes I have pulled old coins at shallow depths also. I know my area is almost swamp like with lots of water pushing things up. I only notice the ground real dry from the end of July to the end of September. I am at sea level or below. We have a clay line at around 6 inches in most areas that stops coins from going deeper. Coins on dirt roads or dirt driveways seem to be deeper by getting stamped deeper in the ground. One last thing, other then Bay Beach detecting I do mostly woods detecting, and I know coins near a tree get pushed up by the roots and are shallow.

Somewhere directly above the center of the Earth.

Well time will tell, been detecting a 1880's mansion that I've pounded for years, recently the entire lot had 12 inches scraped off the top..and yes I can barely contain my excitement! for I know what I pulled from there in the past. Now if I could just keep some of what I find that would be a nice bonus.

Depth is not usually a issue for me hunting the ploughed fields of England, I tend to want better discrimination, to sift out all the crap from the good stuff. But I can see were depth has an advantage.

Depends what you are looking for. If you're looking for old stuff, depth is important. On the beach, depth is everything because the heavy stuff sinks into the sand quickly.

Depth is important! At one site I got a 1808 half cent just by kicking the leaves off but at the same site I got a pewter plate at 2ft deep, it was a week signal but shows how deep some stuff is. Another site I was getting civil war bullets 2-3" deep then a couple feet over pulling them at 18". So I think depth is needed to try to get it all. I dig all signals so I'm not much on disc. That's why is still use the fisher 1270. It's goes pretty deep.

In the summer time when the ground gets hard I wonder how deep I CAN dig? Hate that getting old thing, Maybe 4 to 6 inches is just fine?
C

My best button, (100+ years old), was found just under a leaf? Yet, 3ft away, I dug a Barber of same age at 7inches? Also uncovered a 1851 LC at 2" once.
My most valuable jewelry finds could have been found w a pinpointer. All were recent drops in parks and sport fields.
Of late, I've been concentrating on a single site that dates to 1830s. All finds have been in the 9+ inch range.
Obviously, where you choose to detect will determine what depth is needed. For me, I want a machine that goes as deep as possible. Then again, at times my back tells me to stick to surface finds.

BC1969 said:
Well time will tell, been detecting a 1880's mansion that I've pounded for years, recently the entire lot had 12 inches scraped off the top..and yes I can barely contain my excitement! for I know what I pulled from there in the past. Now if I could just keep some of what I find that would be a nice bonus.

Hope you can also check out the site they dumped the dirt!

Depth is important if you get into digging out civil war era huts and trash pits.

I really don't understand depth, especially in untouched ground. I was in the woods deer hunting in a stand of rather open timber, large trees, with no understory or brush, just a carpet of pine needles. There were no rocks showing anywhere, could have been a park, except it was high in the mountains, on a bench a long way above a stream. Laying on top of the carpet of pine needles was a perfect, lone arrowhead. The last Native Americans to frequent that site was probably over 100 years ago, and the odds are the point was lost longer ago than that. I have no real idea how it got there, except to think that perhaps a gopher pushed it up, and then the soil was washed away in a rain, leaving only the point of top of the needles.
OP

This has happened to myself time and time again ..... It is the great mystery of life.

Depth needs vary with the type of search. If it is coin shooting I would say between 3" and 6" would be average in my area. If you are cache hunting, I would say the average top of a cached item would be between 6" and a foot, although there are the odd cases. I was once walking on a stone foundation wall, about 8' high and got a signal from a cache in the wall 6' below me (2 Box detector). On the beach, I have found rings 10" down and boat anchors app. 4' down. You have to think target and detector before you think depth.
Frank 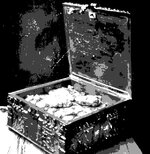 DiggerinVA said:
oh, i almost forgot, last week i was hunting a modern park(for jewelry) when i dug a shallow silver hit.....1901 Barber dime at 3 inches!
Click to expand...

Please tell me that wasn't in Charlottesville...

I don't think depth is as important as people think. I bet there are more good finds made from 7 inches and shallower than there is from deeper than 7 inches.
OP

Bitpusher said:
Please tell me that wasn't in Charlottesville...
Click to expand...

lookindown said:
I don't think depth is as important as people think. I bet there are more good finds made from 7 inches and shallower than there is from deeper than 7 inches.
Click to expand...

I agree.....I have only a handful of really good finds from more than 7 inches. Even most of my civil war bullets are 6 to 7 inches...
You must log in or register to reply here.