South of the Mason-Dixon Line

Just spent close to an hour online filling out a form to open a RRIF since my registered retirement plan has to start paying out based on age....a real pain in the butt. It would be more or less equivalent to the U.S. 401k plan.
Last edited: Oct 14, 2021

bill from lachine said:
Just spent close to an hour online filling out a form to open a RRIF since my registered retirement plan has to start paying out based on age....a real pain in the butt. It would be more or less equivalent to the U.S. 401k plan.
Click to expand...

The Mrs has to do the same thing-kind of sucks now that you have to take 5+% out, so they can grab more.

I don't really need the extra money so net of taxes I'll flip it over into a TFSA so whatever is left after tax will earn dividends and capital gains tax free to compensate.

Man ...If I had you guys money , I'd be out getting a polyester shirt tailored!

Thanks for the chuckles....

And here I am eating homemade gnocchi ingredients 2 medium potatoes, 2 large eggs and about 1 cup of flour maximum cost for 4 servings about $1.00 and yesterday made some home made pesto sauce with the olive oil, walnuts and parmesan cheese probably $3 in total so that makes $4 for 4 portions or $1 each.....that's why we got some extra loot..... 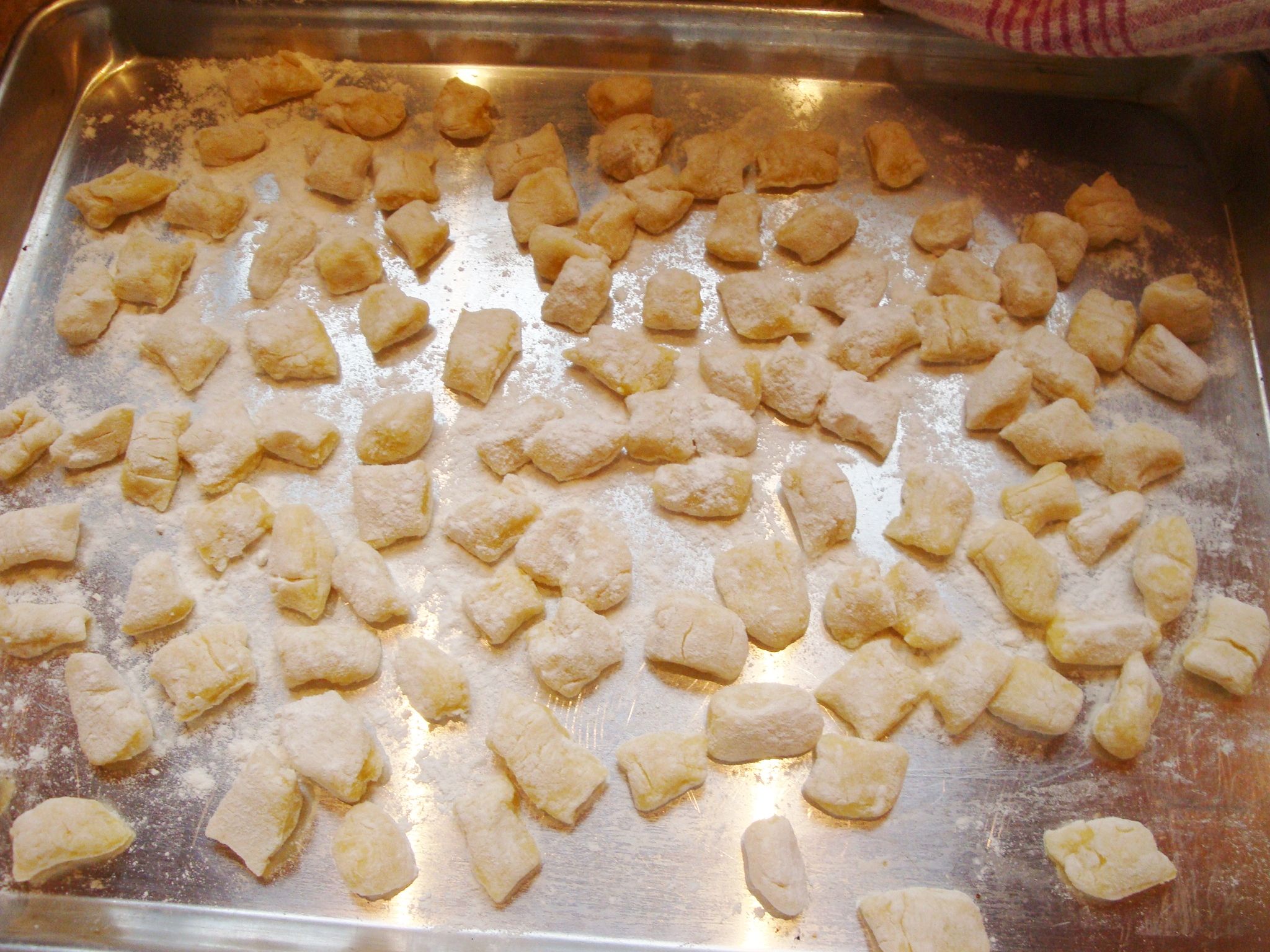 So today I looked at this Metal lamp shade Frame(destined for the dump) 20"dia. x 14"high and what did I see....
A Blue Crab Trap 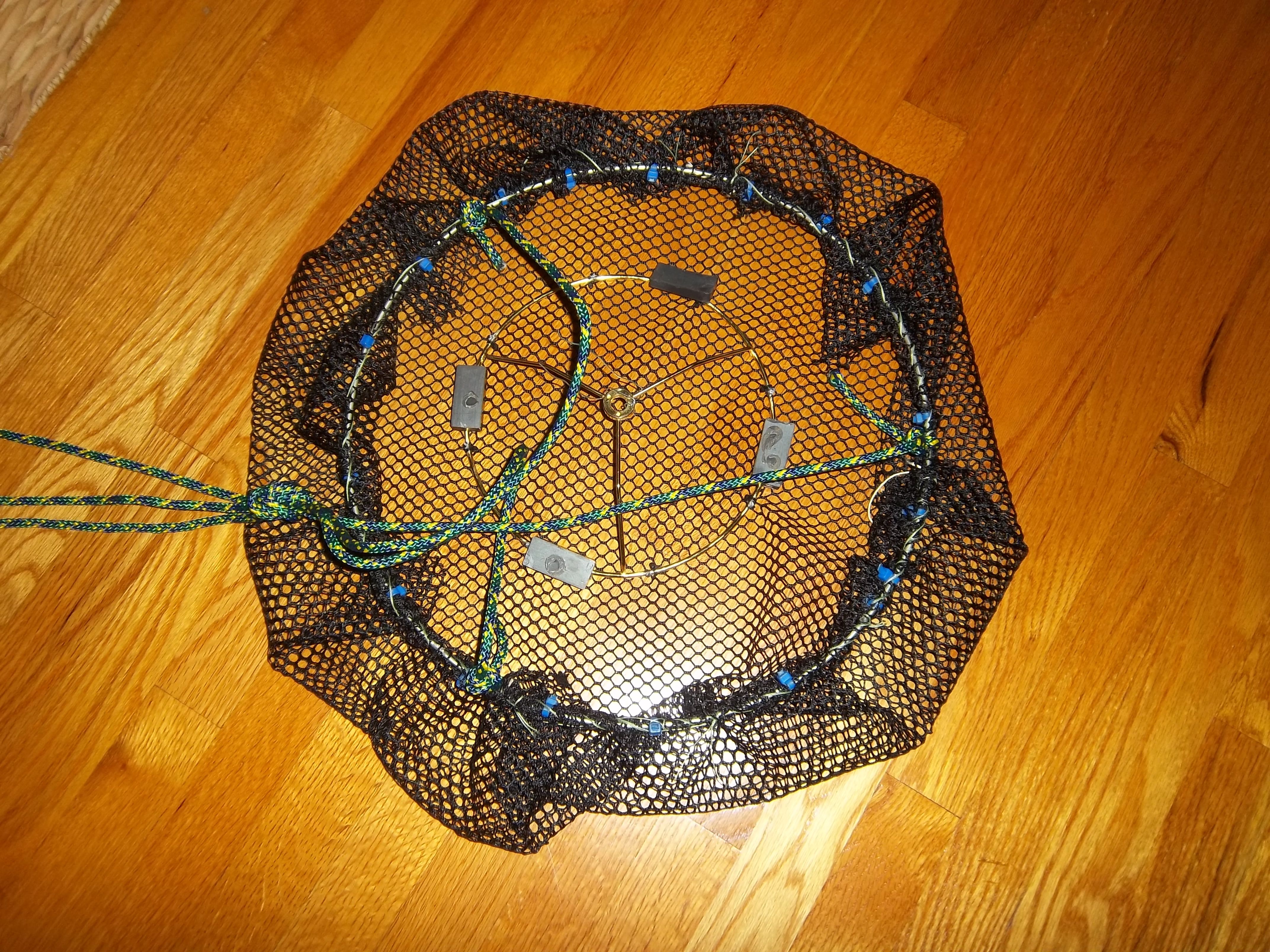 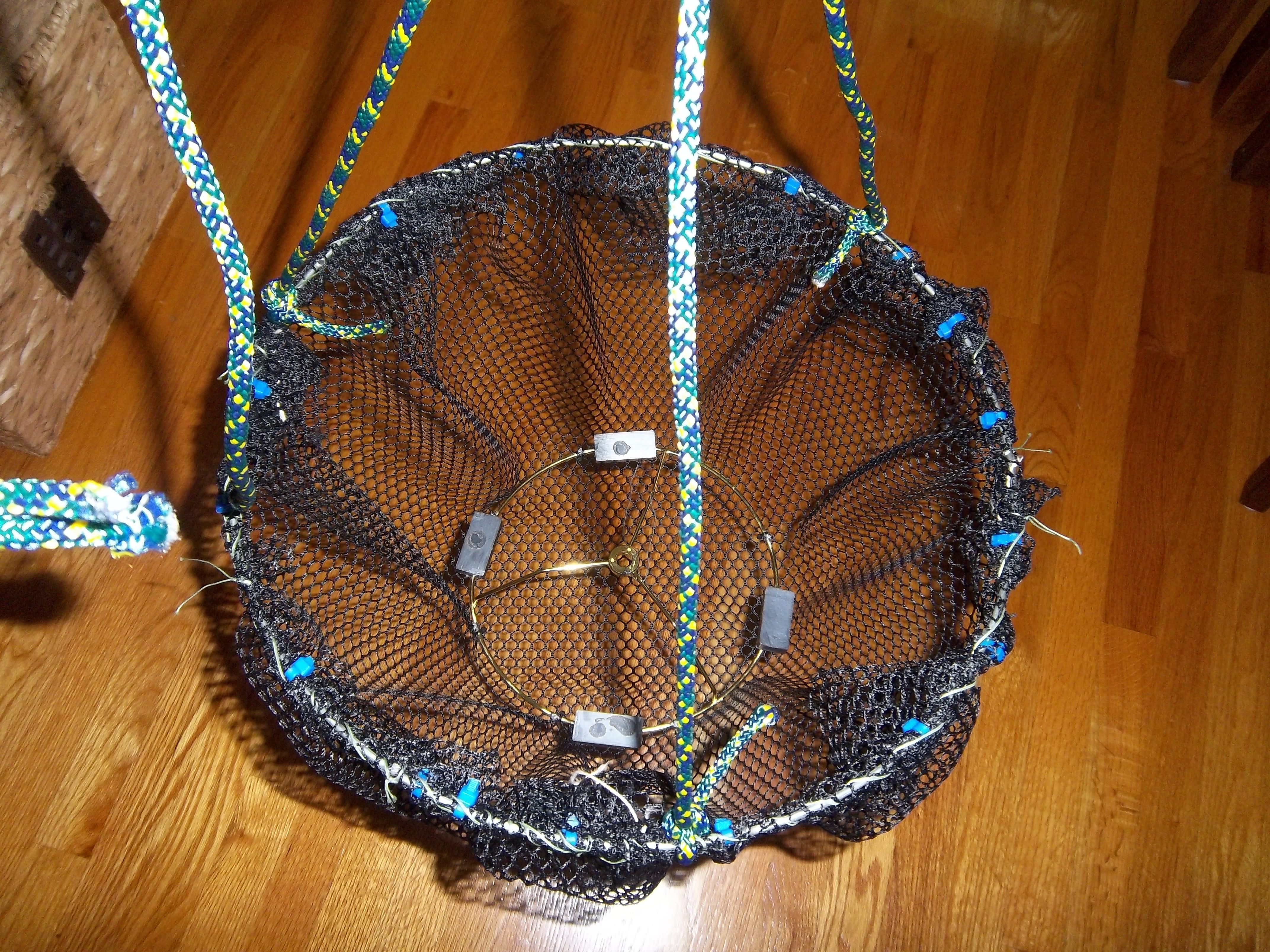 Roger,
When life gives you lemons make lemonade.....now you get to eat free blue crab instead of buying overpriced fish roe.

Not completely finished yet need to tidy up some stuff. 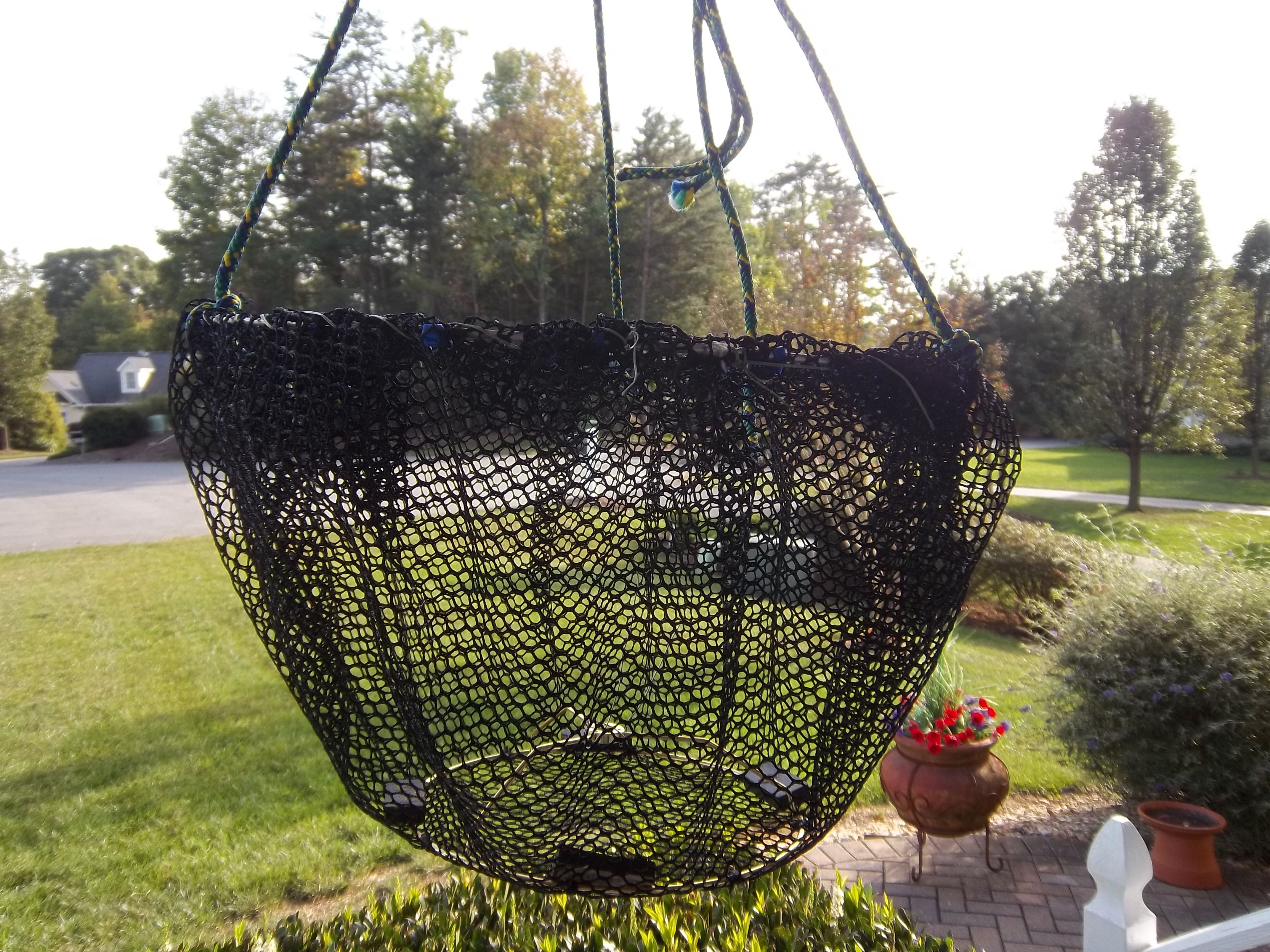 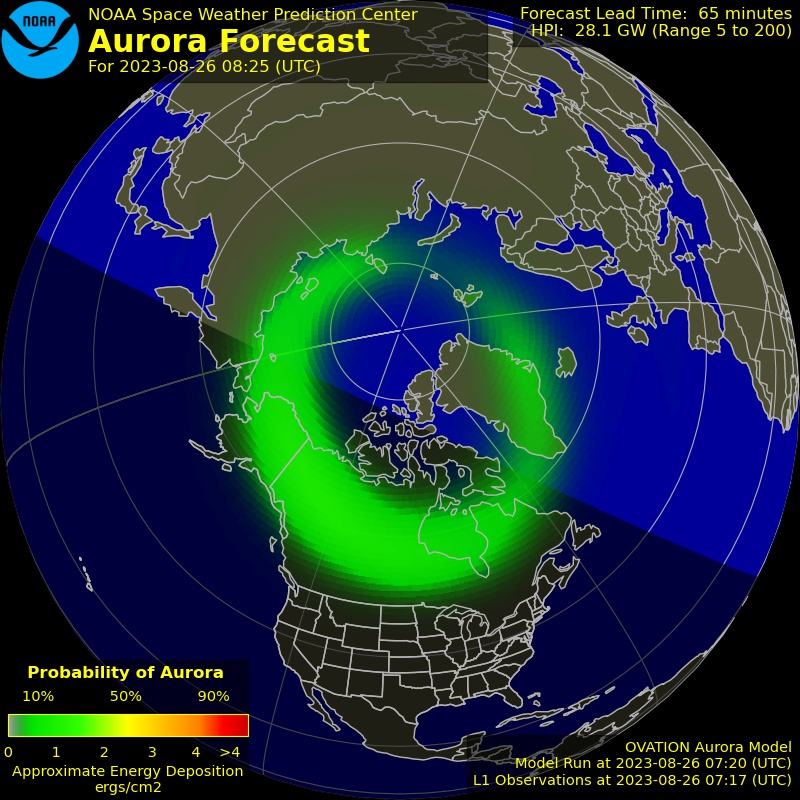 Rusty,
Howdy stranger what you been up to?

bill from lachine said:
Rusty,
Howdy stranger what you been up to?
Click to expand...

I've been hunting mostly, seen several nice deer and passed on all of them. My buddy doesn't have much discretion, he has three out of the four Doe he's allowed already. We put together a grill so we can grill some of the deer meat he has this weekend.

Then we built a tower stand, which is exactly what it sounds like. It looks like a large guard tower, but you're supposed to hunt from it. It took forever to build. There were so many parts, and lifting it up was a nightmare, because it weighed about 300 pounds.

We also herded cattle, loose cattle that is. Me and two friends were riding where they were last seen, and when we found them, we started fanning out on ATVs to herd them back to where they belonged. Then one of my idiot friends starts shooting in the air with a pistol, and the other friend joined in as well. It scared the hell outta me, and it didn't help our situation any, but eventually we got them back. Jokes on them, ammo is so expensive, I'll bet they wish they had those rounds back.


Then I've been trading militaria with a friend. I gave him a blown up piece of Tiger Tank, and he is giving me a Partisan used German ammo pouch in return. The ammo pouch is dated, and has a Russian name carved into the leather, as was done when a soviet partisan or soldier captured a German piece of equipment.

Then I finally bit the bullet, and told the Cashier girl I've been head over heels for over a year and a half now, that I thought she was beautiful. I think it went well, but honestly, the situation was such a comedic debacle, that who knows what the heck happened.

I've also been slowly packing away and selling part of my collection for the move to Pennsylvania. I have fifty X's marked on the map with digging spots in mind. Metal detector is first to go into the car.

I also bought a bunch of junk clothes for digging and working. $10 a pair for jeans at Rural King and I'm good!

Rusty, Glad to see you've been keeping busy and out of trouble. Good luck with the cashier gal.

Disabled "Independence" deer hunt started today statewide.
I stayed home. First due to rain...
1:00 I went outside for a smoke and rolled down towards the woodline. A doe spotted me from behind a utility trailer in the backyard.
I just sat still in the wheelchair and she went back to browsing.
Eventually she browsed her way (maple leaves/ twig tips) to within about 14 yards. L.o.l..
Watched her quite a while.
She wandered off browsing away. May have been another deer farther back.

A nice blending of voices on this standard.