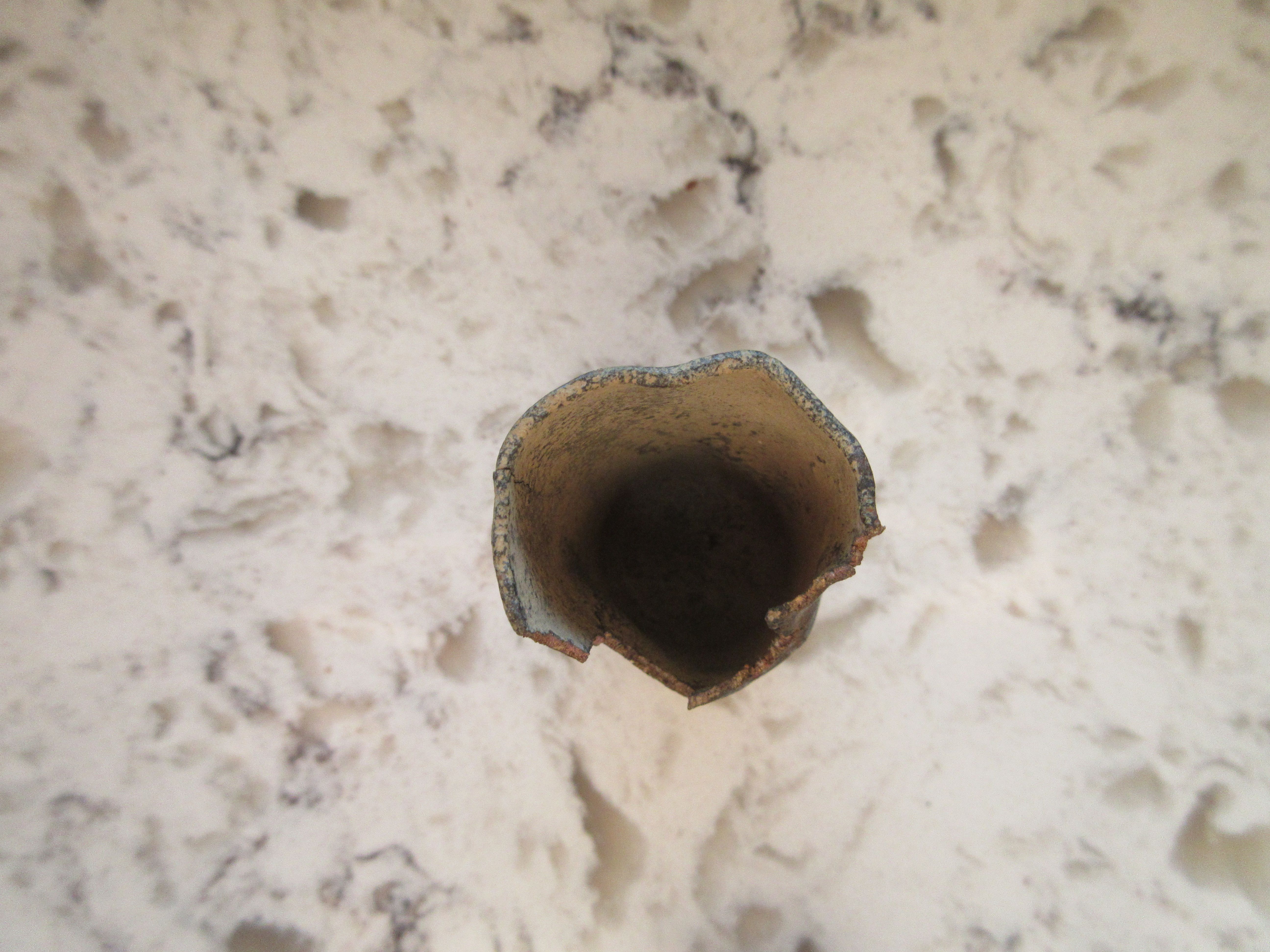 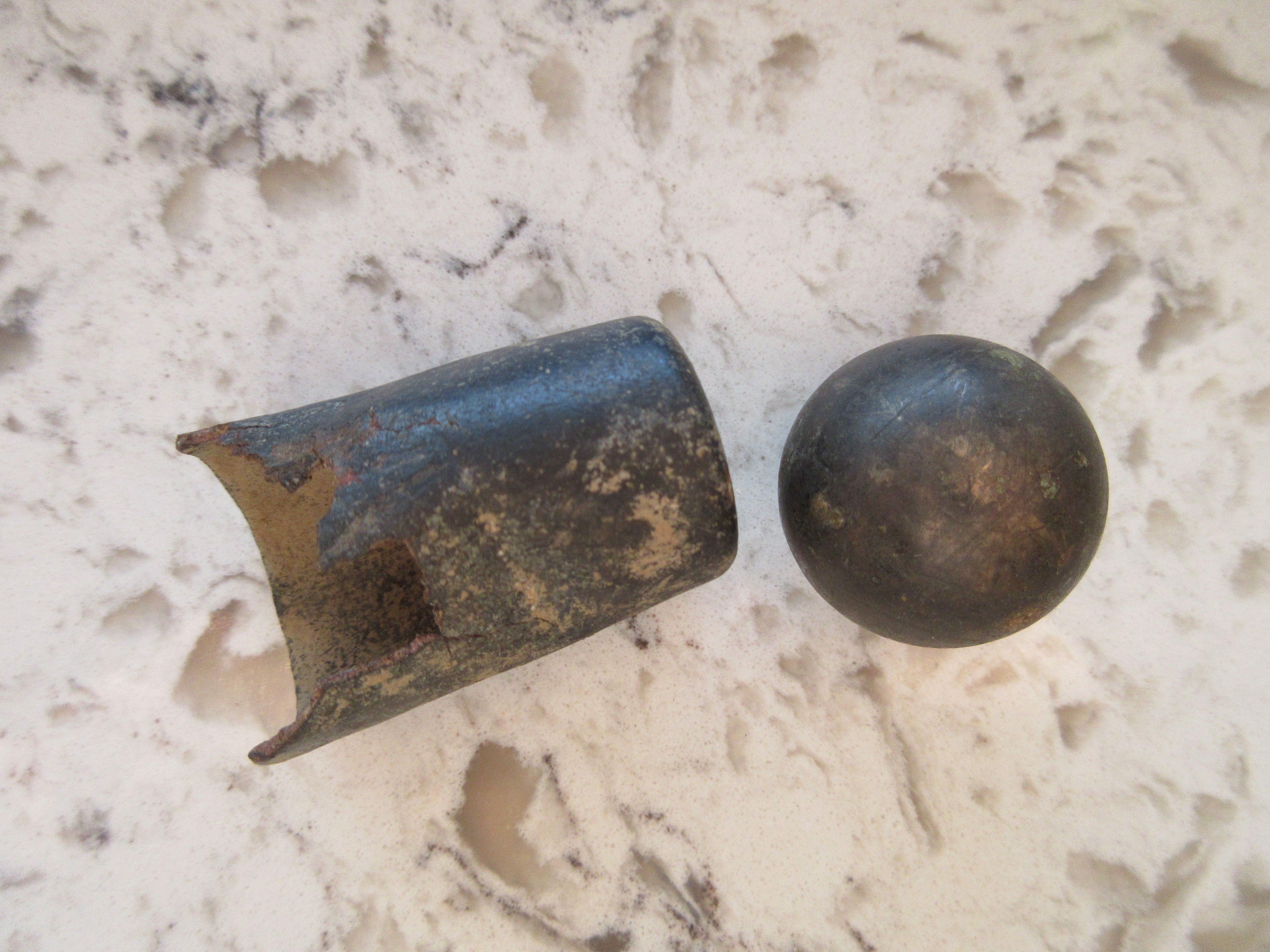 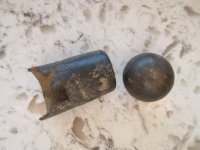 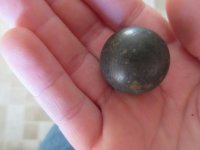 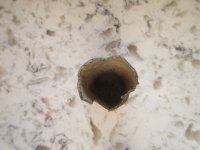 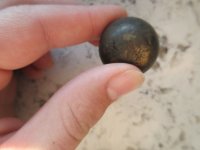 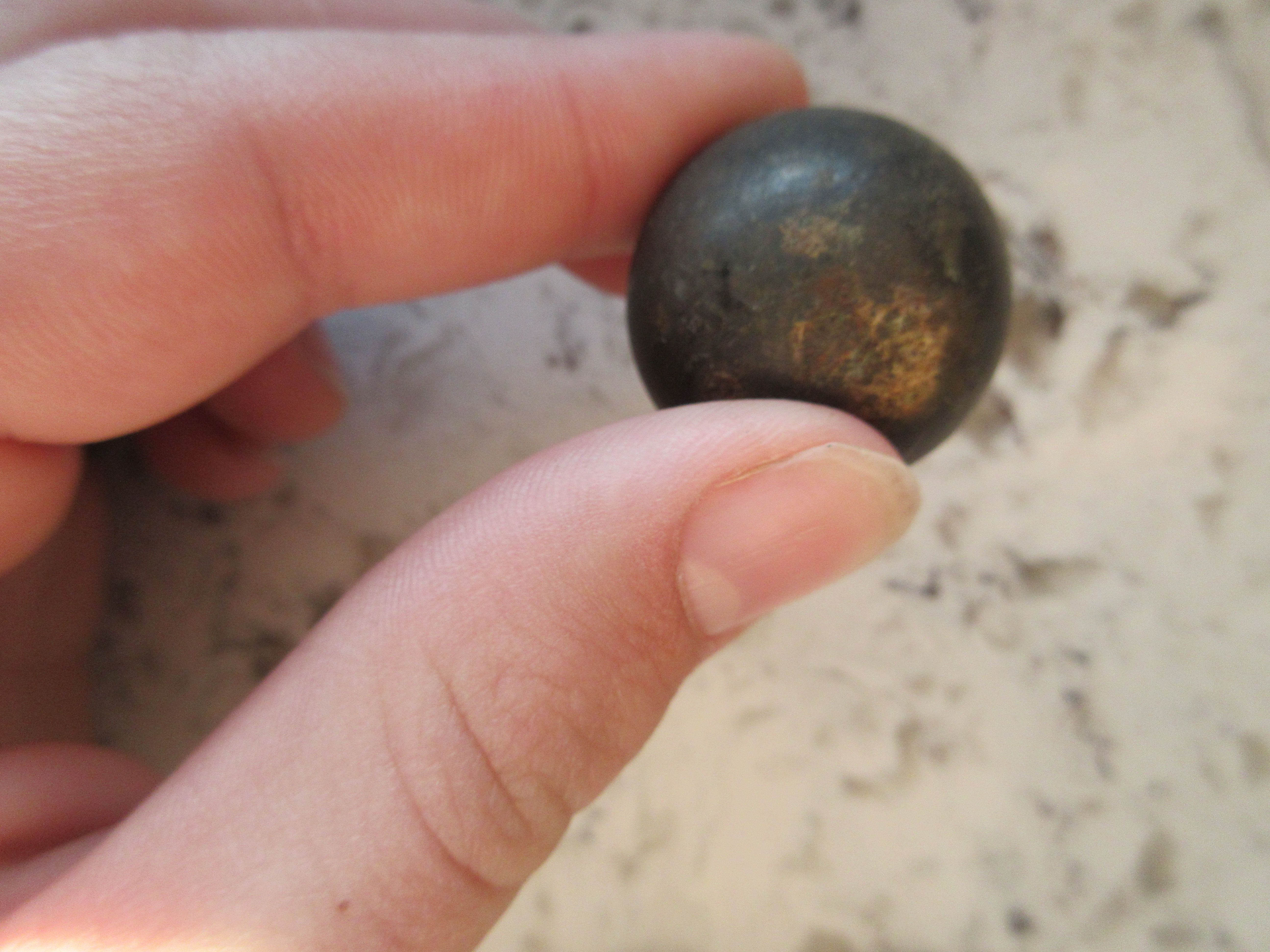 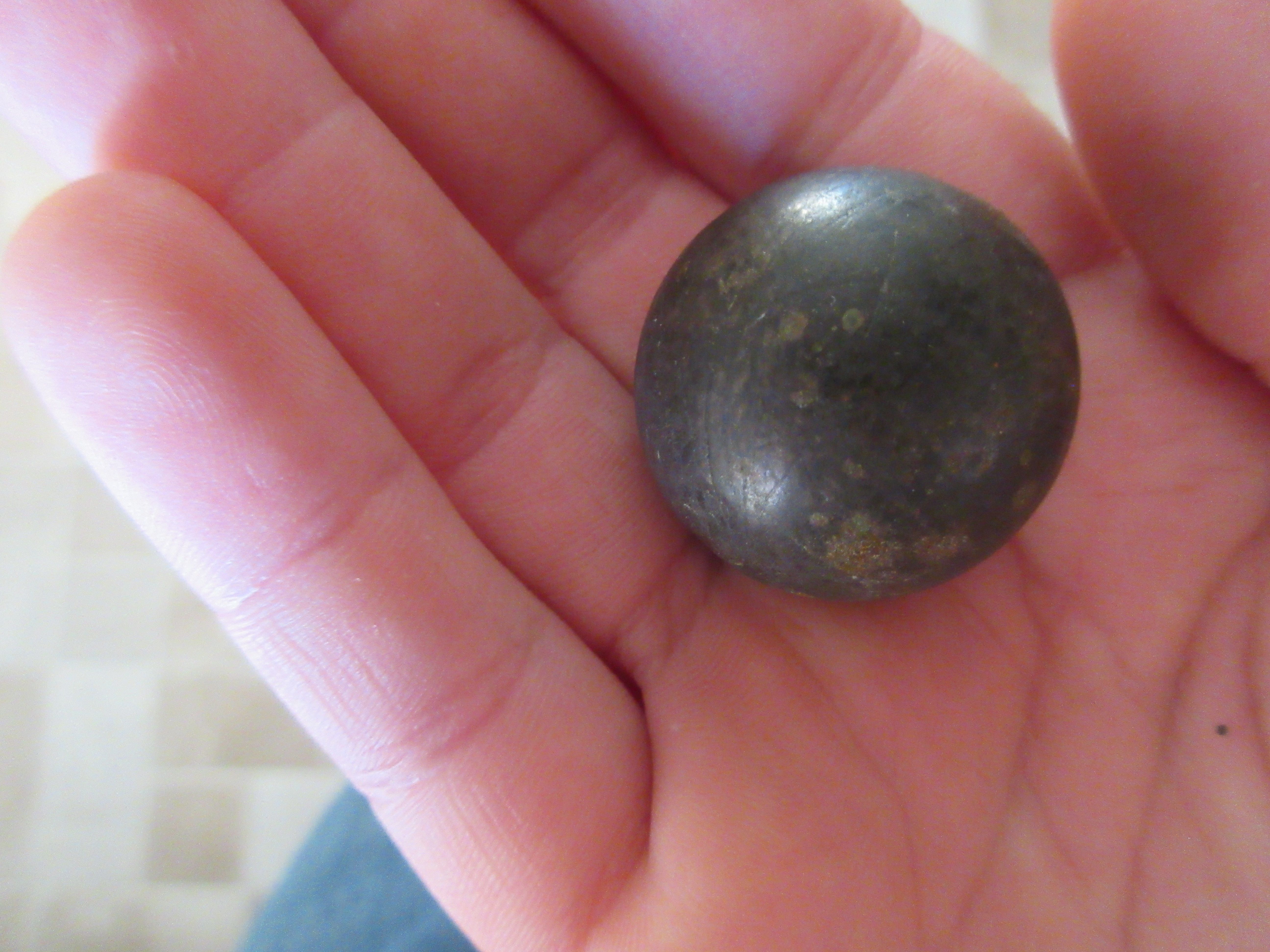 I was out metal detecting and found these weird things would like to know what they are.
Upvote 6

if its heavy like lead, then its a musket/mini cannonball. If its not made of lead, it may be a large type of shooter marble. My 2 guesses

... check valve ball from a water wells cylinder..
Please use calipers and a scale and report back you findings plz...

The other item could be a cane tip. Does it have a small hole somewhere around the rim? But the hole could have been broken out with the missing piece in the rim.

Where did I put that Rifle?
I too am of the opinion that it is a Musket ball and the top cap of a Powder horn.

Is the ball clay or lead?

Yes, give us a hint as to what metal they're made of.
OP
S

They both have a copperish brassish color.

Could musket balls be made of metals other than lead?

Sure. They could have been made of clay, wadded paper, wood, brass, or anything that could be melted down and molded. Lead just happened to be the best for the job at hand.

Lead is plentiful, inexpensive, melts at low temperature, and is dense and soft. Ideal characteristics for bullets. Still is. 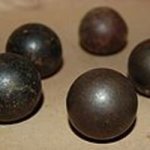 I'm kinda thinkin it could be a musket ball, but I'm not sure about the other thing yet

Seahound said:
I'm kinda thinkin it could be a musket ball, but I'm not sure about the other thing yet
Click to expand...

.... if you get some measurements it will be easier to tell..

"What in the Sam Hill". My mother says that. Must be a Pennsylvania thing.

very cool finds, interested to see what they turn out to be

What in the Sam Hill

Have you ever heard your uncle or grandmother say, "What in Sam Hill …?" It's said in the same tone as "What in tarnation" or "What the H-E-double hockey sticks." It's a euphemism for "hell" or the devil.
So where did the phrase originate? Was there a real Sam Hill?
According to Patricia T. O'Conner and Stewart Kellerman on Grammarphobia.com, the phrase was first seen in print in the early 19th century. The Oxford English Dictionary quotes the Aug. 1, 1839, Havana, New York, Republican newspaper: "What in sam hill is that feller ballin' about?"
O'Conner and Kellerman speculate: "The fact that the 's' and 'h' of 'sam hill' are lower-case in the newspaper suggests that the expression didn't originally refer to a real person."
They add: "The Morris Dictionary of Word and Phrase Origins says the exclamation 'was very popular with frontiersmen, especially when they needed to clean up their language in the presence of ladies.'"
Other sources, however, claim the phrase could possibly have come from a person or a character. Here are a few examples:
In 1887, Samuel Ewing Hill, an adjutant general from Kentucky, was sent by Gov. Simon Bolivar Buckner governor to investigate the famous feud between the Hatfields and McCoys, which had already claimed more than a dozen lives. Reportedly, journalists wanted to know "what in the Sam Hill was going on up there." Read more here. 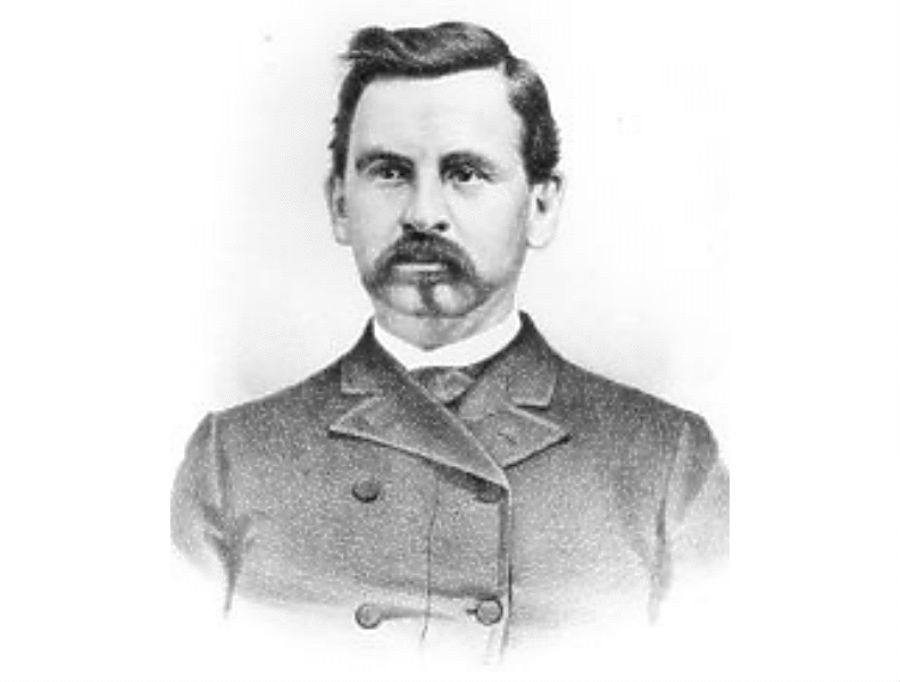 I agree with fat and almy.....cane tip and pump check ball.
You must log in or register to reply here.

A little Gold makes the day