I found this 1877 Indian Head Cent this past Saturday morning on my second visit to a new site. 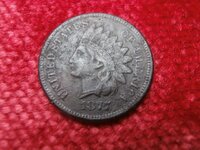 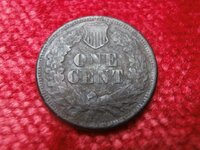 A colonial-period house once stood at the site which offered easy short cut grass for hunting, but little was found on my first 4-5 hour search a few weeks ago. I recovered a tombac button, a musket ball, a Wheat penny, and a Buffalo nickel. Saturday’s search was offering equally dismal results consisting of a modern dime (several inches deep

), a quarter, and a foreign coin recovered over a half-hour search, so I started working my way back to the car. I had other sites to search that morning. I was hoping for one more high-tone signal before leaving, and soon passed over just such a signal about 6” deep. I cut a plug and removed an Indian Head cent with far less corrosion in comparison to what I typically encounter. I gave the coin a light rub and was surprised with the date of 1877. I knew the key date for the Indian Head series was somewhere in the 1870’s neighborhood. “Hmmmmm, was it 1872, 1874, or 1877? Did I have the big key date? Nahhhhh! The key date is 1874. If it’s 1877, than I must be misreading the dirt-encrusted date. It’s probably 1879.”

Anyway, I found the coin about 8:00 a.m. and enjoyed considering the possibilities throughout the remainder of the day while running errands, attending to family obligations, and so forth. In the late afternoon, I finally got home and took a closer look at the coin. It was clearly dated 1877; all finished with Step One. Going to Step Two, I got out my old 2006 Red Book and scanned through the dates, “1877 – Good-4 Condition (near bottom of the grading scale = $575, Very Good-8 = $750, Fine-12 =$1000. I’m not one to overly focus on the value of finds, but there’s some pride in finding a coin that garners such prices, as it reflects the coin’s importance as the big key date of a popular coin series. I’m primarily interested in colonial-period finds – the big coppers; however, I’m also a coin collector, so finding a key date is a thrill.

I’ve dug hundreds of big coppers and Indian Head cents over the years, but I had no expectation of ever finding the 1877 key date Indian Head cent. Most of my recovered Indian Head cents are too corroded for positive dating, so I was very lucky to recover the key date coin with a tolerable amount of corrosion and a fair amount of detail. The coin is clearly a dug specimen with corrosion. It’s worth a fraction of the cost for a non-dug specimen, but I’ll take it and why not? How could I beat it? I don’t think I’ll being digging up any 1877 Indian Head cents in Mint State-Red condition, already slabbed as it comes out of the hole.

Thats a sweet one there for real !!!
A

Nice find! Thanks for sharing...

Thats an awesome find! I love IH and to find one that rare, simply awesome! Well done!

Amazing find! I discovered one in my dad's coin collection. It had a gouge through the last seven. He was still able to get a couple hundred for it!

Congrats! That is one that most people won't ever get to cross off of the metal detector's bucket list.
R

Terrific find indeed, congratulations on that one!

That is cool, I love those Indian Cent coins, your 1877 is a nice specimen, I would love to find one like that, congrats!
S

It's a bummer you didn't get that colonial you were looking for. Might as well just throw it back in the field.

All kidding aside, that is a very rare coin to see on here. And yours is in good condition. Congrats on getting the most sought after Indian Head, and I vote banner.

Way to go! It's not only a '77, but it's in decent shape as well. Was probably XF when lost. Key dates are always a great find. I found an 1804 large cent earlier this year and couldn't believe it.

Threshold beat me to it. I was going to give you the current Red Book value too, lol. incredible find!

Silverseeker said:
It's a bummer you didn't get that colonial you were looking for. Might as well just throw it back in the field.

All kidding aside, that is a very rare coin to see on here. And yours is in good condition. Congrats on getting the most sought after Indian Head, and I vote banner.
Click to expand...

That's too funny! I'm very fond of an early New Jersey copper that I found two years ago. I think it's a wash between these two coins for my favorite copper coin find. I guess that I'll need to set a goal for an early Chain cent to settle the whole matter. I'm very fortunate to be living in Southern New England with its offering of coin finds spanning back nearly 400 years.

It's great to see an 1877--not many posted as of late. Congratulations on a stellar find.
M

Congrats. Looks to be in good condition, i am going BANNER on this one also. Just don't see these found every day.

That's a nice one, welcome to the club
You must log in or register to reply here.

Smorgasbord,of sorts. Even one relic hunters will appreciate